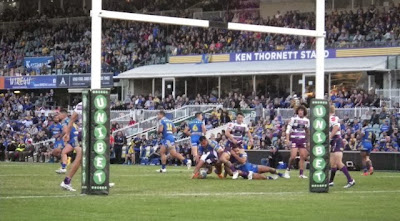 Last Sunday, Mother's Day, Mr E and I took his mother to watch the footy. This was odd (and a little evil on my part) because their team wasn't playing on the Sunday, mine was...against the team of my favourite player. So we went to that game. I felt strange because they were coming to something I wanted to go to...and I felt a bit evil for perving when with hubby and his Mum...and I felt like a meanie taking her to the footy on Mother's day...but I think it worked out okay.

I spent a lot of my teenage weekends at the footy, many times at this ground. I used to go with a friend and sometimes my sister(s). I'd hang around outside the dressing rooms to get autographs. I had my huge flag to wave wildly. When we were old enough, we'd go back to the club after the game and gather more autographs and have our hearts all aflutter if we met a player. I was innocent and naive back then...getting an autograph was my thrill. These guys were my heroes.

I know when I was writing Deep Diving, I banged on a lot about my favourite player who had inspired the story. I watched him play a lot to fuel my imagination to get that story written. I still watch him, avidly. But I made a huge discovery...

My blood raced when a try was scored by my team right in front of us. I was on my feet screaming and shouting. That Coops was right there, close, took a while to dawn on me. So long that I didn't get a lot of photos of him. I probably have equal numbers of photos of him and Parramatta players.

I didn't think that would be possible. But the ghosts of many games past, many players past, and my Parra jersey that is older than most of the guys playing, all led me to screaming crazily for my team. And enjoying every second of it :)

And to add to the reliving the memories component, I took my old film camera with the telephoto lens. And I did remember to take photos of Coops...I just have to wait for the film to develop to see if I got any good ones. Oh, and some Parra players snuck on there too!! And in case you were wondering, Mr E wouldn't let me hang around outside the dressing rooms to get autographs!

Have you ever relived 'old' places and events?
Posted by Catherine at 12:00 AM