I have an Australian Raven pair nesting in a tree above my house, and they have a pair of chicks. I can't tell you how excited I've been watching these birds. I'm a nature nut, so it's not unusual for me to be excited by what I see around me, but this has been next level - even for me!

Noticing crows around is fairly normal. I've watched Noisy Minors harass them. Their call is distinctive and I often hear them. A few months ago, I watched as they build a nest of twigs and sticks high up in the gum tree. I've watched them come and go from that nest, scare other birds away, protect their nest fiercely.

About 3 weeks ago, my relationship with the crows changed.

We have Plovers (Masked Lapwing) nesting on our roof out the back. They've done this for the last few years and it amused me listening to their antics and hearing their protective screams as other birds or possums get too close.

We also have sulphur-crested cockatoos who land on the roof and walk across to the edge before screeching at me for some reason when I'm outside. I usually stick my head up and have a chat to them.

Sometimes pigeons also land on the roof and make a fumbling waddle to the side. I can tell this is a different bird to the cockatoos. The cockatoos are rather heavy in their landing, but walk quite cleanly. A pigeon is quite light in the landing and then scrambles around as if it can't pick its feet up and is skidding across the roof.

Back to a few weeks ago. It was a Sunday and I was watching the football with Mr E, when I thought a cockatoo landed on our front verandah roof. It walked across the roof to the driveway, but it's footsteps were loud and incredibly deliberate. I wanted to know who the cockatoo was with the big loud footsteps (Yes, Mr E thinks I'm nuts).

I went outside, to the edge of the verandah and I peered up just as a Noisy Minor was scurrying away after harassing... a crow! Standing at the edge of my verandah roof right above my head was the most magnificent crow, blue-black feathers gleaming. I don't think I've ever seen one so close. The eye was the most brilliant white in all that dark lushness of feathers. In the few seconds I had to admire, I lost my heart to the magnificence of the bird. And then the crow looked down, saw me, squawked, I yipped, it took off. It was all over - except for my heart racing so fast!

Since then, the chicks have hatched in the nest - 2 of them. The parents have been busy feeding and protecting them, and lately the young have been standing on the edge of the nest, stretching their wings. Then over the last couple of weeks, the adults have been busy making a second nest quite close to the first one. I've been privileged enough to watch the parents selecting sticks to make that nest. I assumed they picked sticks up off the ground but I'm wrong. The selection of sticks for nest building is quite an intricate process. They don't just pick any old stick. Each is selected by running their beak along them, while they're still attached to a tree! I assume they're looking for a particular size and maybe flexibility judging from the way they tested each stick. Then there was quite a site selection occurring before they broke the twig from the branch. Instead of just flying up to the nest, they seem to make quite a lot of hops up the tree, and short flights from branch to branch, before taking flight to weave the twig into place. When the crows fly with a stick, you can hear the wing beats quite loudly, much more so than with a normal flight, so I imagine that it takes some effort to lift and carry each twig that makes up the nest.

I suppose it took about 8-10 days to build the second nest. Over the past weekend, the chick that was flapping its wings the most and hopping on twigs above the nest, moved house. We now have a chick in each nest. On Sunday, as I pegged out the washing, the chick in the new nest took a series of hops across to visit the old nest. I was incredibly trilled to see this journey. Today, I spied an adult and this fledgling returning from a short flight (I think).

It's been an incredible experience. And right above my house. I've been honoured to witness this  family - and I've spent an awful lot of time with binoculars lately!

The Australian Museum website has some information about Australian Ravens, also called Crows. You can find it here.

The term "Friends" used on social media platforms is such a misnomer.

In Real Life (IRL) a friend is someone who has been selected to be close to you. You've allowed them into your closest circle for a reason. Perhaps you share the same, or similar, views and/or values. Maybe you're from the same socio-economic and/or cultural and/or educational background.

Traditionally friends are 'vetted' in some way before you allow them close to you and your thoughts. Over life, friends may come and go, as things change. If you're lucky, you may keep some friends for your whole life.

Friends may come and go, easily or in more fraught circumstances. Friendships may fizzle, or there may be a spectacular falling out, or anything in between.

Social media is a whole different ball game. We collect friends like it's a contest. We have few 'criteria' they need to 'pass'. We receive a request and we accept.

Friends come to us from a variety of ways, sometimes with only the smallest of connections.

There is no category aside from 'friends'. We don;t have separate compartments for friends, acquaintances, work colleague, team mate, friend of a friend of a friend, random stranger, person I met at a bar. We're all just friends, and most people share all their social media posts with everyone who's a friend.

There's generally no filter on these friendships. We don't only see team mates when we play sport or train. We see our team mate at every moment, with everything they share. We see their whole life. IRL we may never have known their sexual, religious, political, race, gender, environmental, etc etc preferences because we only intersected at sport.

Have you ever had a team mate who was your best mate on the field, but you never saw them away from the game? I have. I knew not a thing about their life away from sport for a few seasons. On the field, I trusted them to have my back, to be ready for me/my pass, to help me out, make me look competent. We cheered each other, slapped each other's back, encouraged each other when energy waned in a game. We'd celebrate with arms around each other, huge grins, and goofy silliness. It wasn't until someone commented about my over-familiarity when they thought I was straight, that I realised she was gay. I never crossed into that part of her life. My sexuality, and hers, were not important on the sporting field. We were team mates and our bond on the court didn't cross into any other parts of life. But once I knew, did I treat her differently? Did she treat me differently? I wish I could say that it had no impact, but it did. We were much more guarded with each other. BUT ... why did it change anything?

When you see all of someone's life, there is a high degree of 'intimacy'. And because everyone is different, there may not be a lot of things from one person's life that aligns perfectly with your life.

I wonder if we're ready to see ALL of everyone?

Are we tolerant enough to allow our 'friends' to hold different view to what we hold? On the important issues as well as the trivial?

Posted by Catherine at 2:40 PM No comments:

I thought I had a few books, maybe 6 or 8. Ahem. I underestimated. Quite considerably. There were almost 40 books there, a few more remained on the shelves in the house. I was thinking of taking the books to the workshop, but I'll need a huge suitcase to lug them in!

I'm so glad I squirrelled them away. It was like being reunited with old friends. And how much fun am I going to have going through them and finding excerpts. I may have to read some of my favourites again.

Do you book hoard? Do you have favourite old book friends?


PS I have to say how much this blog has meant to me. Over the past 8 years, I've expressed myself on here, opening myself up to all manner of discussions, thoughts, ideas, challenges. I've been able to do that without much fear (because I don't advertise this blog, so very few people read it - thank you to those who do MWAH!), with time to think, research, and write sometimes with regularity and sometime spasmodically. Having this presence here has taught me so much about myself, made me push beyond my comfort zone, and get me to a place where I feel comfortable talking about sex, writing, erotic writing, and many related topics. I wouldn't be doing workshops, and loving doing them, if it wasn't for my blog journey. Thank you for being a champion, a teacher, a discipline, and a space for my growth. Thank you blog readers for being on my journey with me.
Posted by Catherine at 12:00 AM No comments: 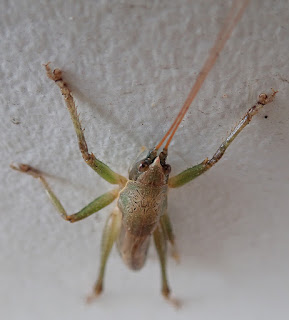 For the last few weeks, this grasshopper has hung around on the outside wall, and I tried to ignore him/her but they were calling for their photograph to be taken. Yet, when I began taking photos, apparently, they weren't all that thrilled by the camera in their face and made some quick movements to a higher place where my camera could not reach!

If you've been reading this blog for any length of time, you'll know my ID of critters is not the best even if I try hard. In fact, my uni tutor used to laugh and say "no" before I even gave him an ID I'd worked out... that's how bad I am! Which means I have no clue what this grasshopper is... or even if it is a grasshopper. And just to make things worse, I did a grasshopper collection for a uni assignment and I'm sure I had one of these guys in it and I'm sure way back then I may have even known what it was, but alas, it's fallen through my brain cracks (I was thinking Tettigoniidae family because of that pointy part on the top of the face. I've a vague memory that all pointy faced things are that family. But that seems to be Katydids and Tree Crickets and I don't think that's right).

The Australian Museum has some info you can read here.

And that led me to a photo of a similar creature, which is here. And much to my shock and surprise, it's an Olive-green Coastal Katydid, in the Tettigoniidae family!!! It has similar markings on the body. Being nocturnal may explain why I see it sitting on the wall every day. Maybe I should be glad that it's stayed on my outside walls and hasn't moved in to live in my curtain folds!