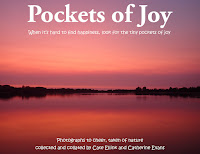 When it's hard to find happiness, look for the tiny pockets of joy.

A book of photographs to cheer, taken of nature.

Pockets of Joy began online as a reaction to the bushfires that burned across much of Australia. Cate needed to halt her spirally negative thoughts and turned to nature. The posts proved popular and friends encouraged the creation of a book.

Pockets of Joy is a hardback book, containing 102 photographs of nature, taken between 2015 and 2020. Each photograph is depicted in colour on a full 280 x 216 mm page. A short comment with information, location and date is given for each image.

These images use a different angle or view to show the wonder of the world around you. Every photo is taken on a basic point-and-click camera by an amateur, which may inspire you to do the same.

Pockets of Joy is perfect for remembering the joy found in nature, often needed during the tough moments.

I took back the rights to this story originally published in Nov 2012, and self-published it. I included a Part 2 of the fantasy, and popped some published short stories in as well (the ones that had been in Rachel Kramer Bussel's and Rose Caraway's anthologies).

It's available as an ebook, and I have print copies if you'd prefer print (email: cate@cateellink.com).

All 8 of the Down and Dusty stories, in reading order.

She’s never been shy about what she wants – and now she wants them both...

Hannah Maynard, sports reporter, is sure it’s only her lust-filled fantasies linking Australian rugby league captain, Charlie Maxxin, with relative newcomer, Lyle Smythe-Jones. She and Charlie have shared quite a few steamy sessions over the years, so surely he’s not in a relationship with the young, unflappable player she’s dubbed Marble Boy?

Hannah lures Charlie to dinner and his reaction is all the answer she needs. But she doesn’t want to report on the biggest secret in Australian sport—she wants to take part. However, it’s not just Charlie’s decision and it can’t be just casual. If Hannah wants in, she has to be all in, with Lyle, with Charlie, and with the hottest action any of them have ever experienced.

Secret Confessions: Down and Dusty - Lucky

They say that no one has secrets in a small town—these women prove them wrong.

Eight brand-new stories from some of Australia's hottest writers in Australia's hottest genre. From the bar stools of the local pub to the wide open plains of the biggest stations in the world, these tales travel the dusty roads to the heart of Australia and the women who understand how to work hard—and play even harder.

In the latest in the wildly successful Secret Confessions series from Escape Publishing, the women of Down & Dusty invite you into their lives—and their bedrooms.

As the single female owner  of Milpinyani Spring’s only pub, Lucky has learned that her behaviour has to be above reproach. She works hard at home, and when she needs to play hard, she does so—far away from the prying eyes of her neighbours and friends. So when the hot new cop swaggers up to bar, she knows the rules: look, don’t touch. But Dare doesn’t know how to play her game, and he’s about to show her that the only rules that count are the ones that you break.

Go beyond traditional fantasy, cuckolding is where its at!

Imagine…
You’re fast asleep and your wife comes home late. She whispers a question next to your ear, “Would you like to know what I just let another man do to me?” Her words aren’t loud, but the sentiment rouses you.
Or…
What if you want to show your husband how you need to be taken by other men, while he is only permitted to watch?
Or…
What if you’ve known for a while now that your wife isn’t satisfied, and that it’s time to enlist the help of another man, finally giving her what she wants? What she deserves; a man whose physical prowess far surpasses your own.
These are but some of the aspects of the cuckolding fantasy.
Cuckolding is deeply layered. From privately whispered scenes between a Hotwife and her Cuck, to a wide range of humiliation play requiring the adept skills of a big, beautiful Bull…or three.
“Tonight, She’s Yours” is guaranteed to get you randy. I must warn you though, with this much 'One Handed Reading', you may experience a bit of a hand cramp. I do hope that you have a good time.

It Happened At Cafe Nix

From the hottest writers in Australia comes a scintillating new series. Enter the world of Sydney’s elite, and find out what goes on behind the doors of the most exclusive addresses in the country…

Meet the Housewives of Sydney. They are wealthy, elegant, poised, and constantly in the public eye. But what goes on behind closed doors, in the private homes and parties where the cameras and paparazzi aren’t welcome? Delve into the most personal details of their relationships, their friendships and their lives. The only question is: can you handle the heat?

Lana lives her life by her own rules – and she has very few. What she wants, she goes for, and she very rarely fails. So when a young, handsome waiter at her favourite restaurant catches her eye, she has no hesitation in asking him to escort her home.

But one night of passion opens up exciting new possibilities, and a chance for Lana to enact one of her deepest, most illicit fantasies.

There's also an anthology features all 11 of the Housewife stories!

There’s nothing Briana hates more than a hairy lip. Moustaches make her moan. She simply refuses to see any advantage in having a spiky caterpillar living on your face. And she has never, ever kissed a man with a mo.

But it’s November when lots of men grow a mo to raise money for charity, and in Briana’s office this year, that means kissing, lots of kissing. For every kiss a moustache-wearing man gets during the thirty days of ‘Movember’ money is donated to the charity.

Can Briana come to terms with hairy top lips or will thirty November kisses break her?

Samantha is celebrating her newly retired status from competitive triathlons with a diving holiday in her favourite place in the world: Australia’s Lord Howe Island. But all divers need a buddy, and Sam can’t dive solo. A chance meeting with rugby league superstar Cooper Sterling in the dive shop seems serendipitous. Sam can’t wait to have a partner who might be able to keep up with her.

It soon becomes evident that Cooper and Sam are compatible both in and out of the water, and things gets seriously sexy. But Sam is disinclined to be another football groupie, and Cooper has been burned before. So the rules are clear: a holiday fling, no strings attached, and they part as friends at the end.
But as the final days of their time together come to a close and a life apart becomes a reality, Sam and Cooper start to question their decision. Is this holiday fling really the finish line or can Sam and Cooper turn their friendly competition into more than sizzling sex?

Rachel Kramer Bussel has 69 new short stories compiled in The Big Book of Submission. I've contributed Control. All these short stories had to be less than 1200 words.

You can find out where to buy it, here. 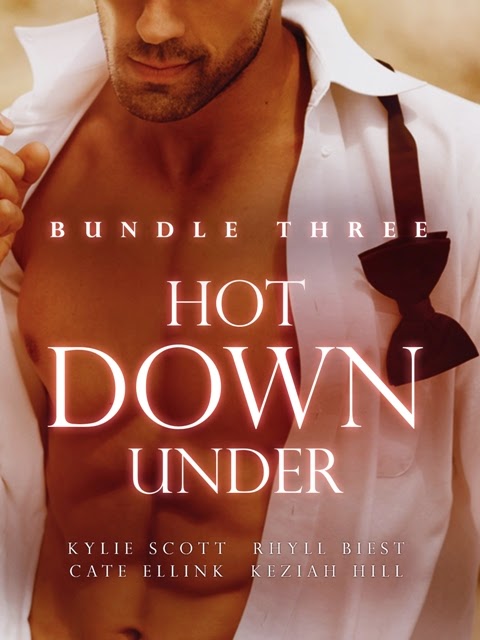 Hot Down Under - Bundle 3

Momentum have bundled up our short stories into 4 bundles.
I'm in with Kylie Scott, Rhyll Biest and Keziah Hill, in Bundle 3.
It's A Real Online Fantasy, unchanged from before, but it's great to read a bunch of us together!

It’s lust at first sight when Mac sees Jason shirtless and sweating on the back of a truck. Jason is the army sergeant assigned to support the six-week scientific expedition that Mac is participating in, and might just be the perfect candidate for another journey of discovery that Mac is desperate to undertake — sex.
Fraternisation between students and staff might be strictly prohibited, but everybody knows fruit always tastes better when it’s forbidden.

A Real Online Fantasy. Published by Momentum as part of the Hot Down Under series.

Can an online fantasy ever become real?
When Condamine connects with Esquire in a chat room, neither expect their mutual pleasure and close friendship will become something far more intimate and real. But when the opportunity to meet Esquire in the flesh comes up will Condamine – Caitlyn, in real life – be bold enough to act out her deepest fantasies, or will she hide away from the world behind the comfortable glare of her computer screen?

Pain Surfer was published as one of the 69 short stories in Gotta Have It: 69 Stories of Sudden Sex by Rachel Kramer Bussel.

You can find out where to buy it by clicking here.