Wishing you and yours a Very Merry Christmas!!

I hope Santa finds you and showers you with gifts - even if you've been a bit naughty :)

Today's word from The Wordsworth Dictionary of Sex is:

I almost skipped over this word thinking it was the constriction of the airways...but it has a sexual meaning too. Here it is...

a type of phimosis (ie a narrowing of the opening of the penile foreskin so that it cannot be retracted easily) that occurs mainly in young boys who insert the penis through a metal ring or other hard metal object, after which swelling occurs so that the penis cannot be withdrawn. If the device is not removed, usually with a jeweller's saw, gangrene can develop, requiring amputation of the affected part of the penis.
Posted by Catherine at 12:00 AM 2 comments: 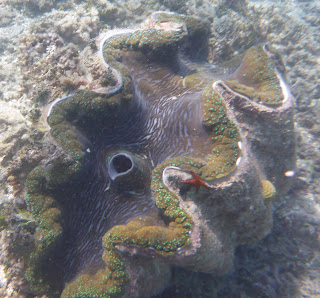 These are from ages ago (2015) when I went to Cairns. I've been saving them so I could gather a lot of info on the clams - but I'm slack and so that hasn't happened!

Giant Clams have always been one of the 'things' I've wanted to see, so it was a thrill to bump into them when snorkelling and diving. I had an idea that they weren't as prolific as they seemed to be, I've no idea why!

I love the top photo with the red starfish on the edge of the clamshell. 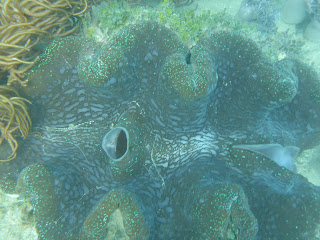 They really were a beautiful creature, and I was exceptionally excited to see them :) Childhood dream!

Today's word from The Wordsworth Dictionary of Sex is

I've heard of French kissing (open mouth kiss with tongues) and French letter (condom) but never a French abortion and it's kind of cool...

Over the last few years, particularly in WA and the north coast of NSW, there have been a higher than usual number of shark attacks. It's caused quite a lot of rather hostile discussions and a lot of media coverage.

Only a few of the victims of these attacks have died, which to me indicates curious sharks rather than vicious man-eaters, especially with Great White Sharks, those responsible for many of the attacks.

When I was a kid, a friend of my father's was killed by a Great White. We heard about it on the radio in our kitchen one morning when having breakfast. This chap had a very unusual name, so there was no mistaking the victim. We were stunned, mostly because he'd visited not long before and given us health products and not chocolates, and we'd complained - which now made us all feel guilty. The vivid images in my mind when I heard about his attack, were nothing compared to an eyewitness account that I overhead later. When a Great White is after a feed, you don't get away - or at least Dad's colleague didn't. All they recovered was some wetsuit material.

Random attacks have always occurred - we're prey in the predator's ocean after all. But these higher number of curiosity attacks have me puzzling. I hope that there are people doing some big picture thinking on this issue.

For shark behaviour to change, or to have seemingly changed, something must have changed to cause it. So I've been puzzling over a few things that may have lead to these changed patterns:

I know on social media, there's been a huge increase in drone photography and footage, and many people are shocked at the number of sharks sighted, the numbers of bait balls, the proximity of sharks to the shore. I'm not sure that these are indicative of any oceanic changes. I think a lot of this is just that people have never seen these phenomena for themselves before, and so they're startled to see it. They share it, causing a heap of people who may never have seen this all to panic. Bail balls, sharks close to shore, dolphins herding fish, are all things that you can see from shore, if you know what to look for and spend any time looking. I know people who do plane shark spotting and they don't think numbers on the south coast are much different - but I think people's access to seeing this has hugely increased.

But photos and social media aren't what I'm thinking about for WA and northern NSW. I'm thinking more of a scientific approach where a whole heap of aspects are looked at and a big picture is created to see if we can work out why these changes are occuring - or possible reasons for the changes.

I don't think there will be one answer. I think it'll be a multi-faceted answer. But if we had some idea of what had changed, we might be able to find some way of minimising risk, without using bandaid solutions like drum lines and shark nets.

Just my two bob's worth!

Today's word from The Wordsworth Dictionary of Sex is:

a person who is incapable of a full sexual response with anyone other than his or her spouse. The term is primarily applied to a man who is impotent with anyone except his wife or someone resembling his wife.


Hmm...interesting that it extends to people resembling his wife! That's kind of like serial killers having a 'type', isn't it? You could write a book about a man's adventures with women all of similar appearance! 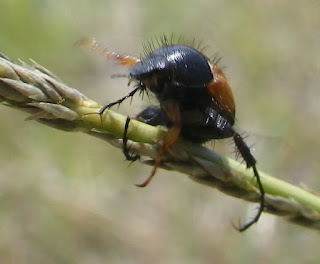 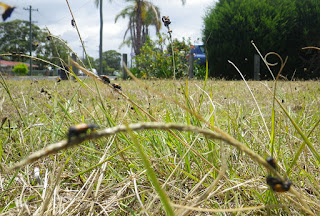 I got excited yesterday and put these guys on social media and forgot Wildlife Wednesday - well, I forgot it was Wednesday yesterday.

Yesterday I walked down to the local shops. I've been reading a book called The Bees by Laline Paull, which is amazing because it's written from the viewpoint of a bee. So, my mind was on hives and finding flowers for nectar and pollen, and I was looking at my feet at the flowers and pollen when I noticed swarming animals in the grass heads. I'm allergic to bees, so I made sure they weren't bees before I walked through. They were tiny Christmas beetles. 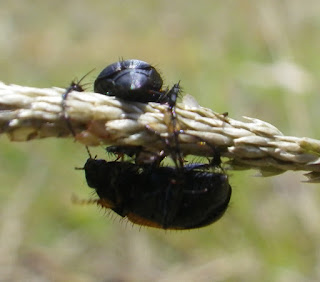 I had to lie in the grass in the public walkway, but it's a quiet town, so who would see me, right? Unfortunately, peak hour seemed to happen at that moment, even if it was lunchtime!! So, yes, a few people saw the derelict lying in the grass. Only one man came to ask what on earth I was doing, and rather than be fascinated, he just looked at me as if I was peculiar! Gosh, doesn't everyone lie on the grass to get up close to amazing sights?

These guys weren't thrilled to be photographed. They had far more pressing things to do - like crawl all over everything and each other, but I got a few shots. (Who knew they were so hairy!?)

Here's the info from the Australian Museum on Christmas beetles.

None of these look like the beetles I saw...and they all say they eat eucalypt trees and not grasses. *sigh* I probably call them Christmas Beetles and they're something else - what a shock! LOL.
Posted by Catherine at 2:19 PM No comments:

I've been rambling on with thoughts about women and society for a few Phallic Fridays now. It's all because of the Dangerous Women Project posts, and Emmanuelle's interviews, and so many other things happening in the world and my life!

I don't understand my thoughts, or where they're going, so I'm rambling to work it out.

I read a Dangerous Woman post about the colour red. The author was Nepalese. In the post, she spoke of widows having to be stripped of the colour red, which they had adorned at marriage. But not only were they stripped of red, but they were not to wear colours, were not to participate in society or religious events, were not to wear jewellery. They were pushed to the fringes of society because they no longer had a husband, and therefore were no longer existing in their own right.

So many societies do this - the shunning of the widow. It's one of the things that really made me not want to get married - the fact that it's seen that the woman becomes a part of the man. It's in biblical references, a part of many religions, and even exists in society itself. I have ended up married, but I refused to change my surname because I would not be owned. That's caused some consternation in my family and friends. I get mail address as Mrs 'husband's initial', 'husband's surname'. He gets mail addressed as Mr 'my surname' but never my initial. Family don't know what name to call me.

Why should it be so difficult? I have a name, he has a name. Just because we married, doesn't mean we have to be grouped and classified as one entity. We can remain separate entities and still exist together. (Don't get me started on boxes and classifications that the world is so damn fond of! Linnaeus has a LOT to answer for.)

This male 'ownership' thing irks me no end. It's still so prevalent in society, although I hope it's improving. Twenty-five years ago, when I looked at getting a home loan, I was a single women and no bank would loan to me. They would loan to single men. When I complained about this double standard, I was told that women could end up pregnant and unable to pay the mortgage, whereas men couldn't have this happen. Dear God! I was appalled. They could default on their loan in myriad ways, except this one, and that was held against me - even though good, easy to purchase contraception had been around for years!

There are so many little discriminatory things we overlook, which all add up to big things in my head. Even the title of my Friday posts, I use "Phallic" because that denotes sexual. But hey, it's related to the male sexual organ. If I wanted to use a similar word that related to the female organs, is there one? I googled, and found vulvic and vulvate, which I have never heard of outside of scientific descriptions. In other languages there's Yonic (Sanskrit) and Pudendal (Spanish; although, in high school, without the 'l', this was a swear word meaning cunt, and puta/puda meant bitch, so maybe google is tricking me here!). Maybe I should be using one of these terms instead of the handy male term.

I worry too that the alt-right, or whatever they're called, are quite adept at putting women in their place. They may use women to help them, but they're kept in the background for the most part. I don't think this is something they address, just something that's a part of their psyche. Look at the President-elect and the way he referred to Hilary Clinton throughout the campaign - Secretary Clinton. It was said with just the hint of a sneer (in my head) which made it more the 'sitting on the bosses knee' secretary, and not a high powered political position secretary. That really got up my nose.

So I'm worried about the world. About society. About the place of women. The role of sexuality in society. I'm worried that women are making gains, but that's rocking the male-dominated bedrock of society, which is in part, causing this social backlash. And I'm concerned that I don't know where it's going, how it will affect me, or how I can fight it.

Anyway, maybe I'll go back to sex posts. Find some interesting sex terms and post about them. I have a Dictionary of Sex. Maybe I'll start opening a page and picking a random word each Friday and discussing that. It might stress my brain less :)
Posted by Catherine at 12:00 AM 2 comments: