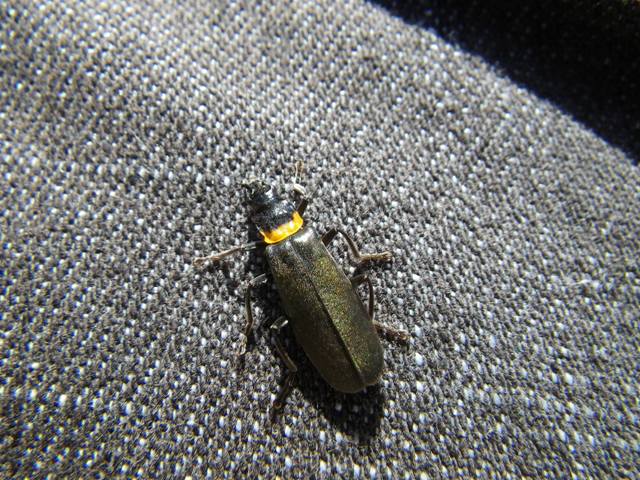 These beetles are EVERYWHERE at the moment. Over the last few weeks they've been here - you see the occasional one at the beach, down the street, in the yard - but this last fortnight, there have been hundreds of them. At the beach was most noticeable where they were constantly landing on me and I was trying to save them from drowning... but there was a high tide mark of dead beetles that looked like a black line of small shells - I wasn't saving many! I don't recall ever seeing so many of them.

My sister was visiting last week and she said she'd Googled copulating bugs (!!) to find out what they were (it didn't work for me) - they're Soldier Beetles. And that's what a lot of them are doing - the bug piggy-back - but no photos of that, sorry!

Here's some info from CSIRO -
It is still something of a mystery why the Plague soldier beetle (Chauliognathus lugubris), a native species found in temperate southeastern Australia, occasionally builds up to massive numbers. Its grubs live in the soil, feeding on other small creatures. The adult beetles don’t seem to eat the plants they settle on, although the sheer weight of a mass of them may break weaker twigs. What they are more interested in is sucking nectar from flowering trees, and copulating.

Our researchers have recently found the genes that give the chemical (they exude a white viscous fluid from their glands that repels any predators thinking of getting too close) its anti-microbial and anti-cancer properties, and were able to replicate the synthesis in the lab. This may one day lead to the development of new anti-biotic and anti-cancer related products.

It seems like the south-east of Australia has had perfect conditions for the Soldier beetle this year. I hope they've done a lot of copulating to keep the beetles going. Antibiotic and anti-cancer products from them could have us saving them all from drowning in the ocean.