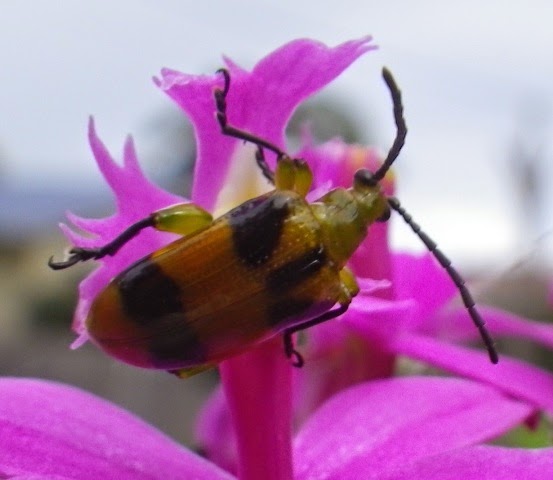 I can't believe these photos, so I had to share.

This crucifix orchid (Epidendrum spp.) grows near my mailbox - in this brilliant purple colour, and also red and orange. It's beautiful but wild!

The other day as I got my mail, I noticed this tiny beetle on the flower. The flowers are only a couple of centimetres long, so he's little. I ducked back into the house to grab my camera, and the beetle was still there!

The next day, he was still there but the flowers were vanishing. 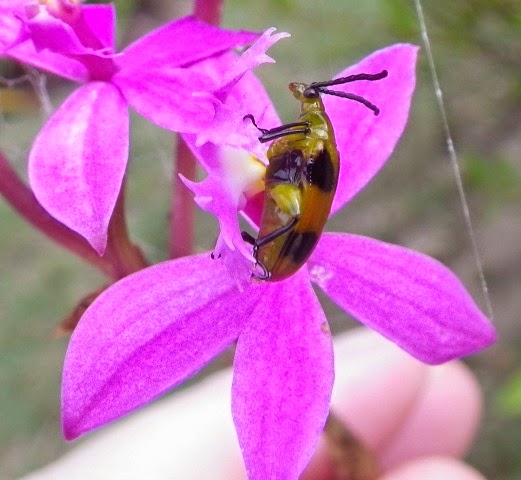 A couple of days later and the beetle (I guess) has devoured the whole growing tip and there are no flowers left at all on that spike. He must have sucked the sap out of the plant from that growing point, killing the flowers.

Now, I've found what he is! The Orchid Beetle (Kind of obvious, huh!)

The Orchid Beetle is of concern to amateur and commercial gardeners as it feeds on the leaves and flowers of orchids, leaving them disfigured and unattractive. The recommedation is to kill them because they breed rapidly and can kill off your orchid. Oops! I only took a photo :)

The Orchid Beetle is about 1 cm long according to the Australian Museum website. And they don't have much information about this guy - and their photo of him has a big pin in it - just in case you want to see a pinned beetle!
Posted by Catherine at 12:00 AM