I'm making the stretch beyond my yard again today. 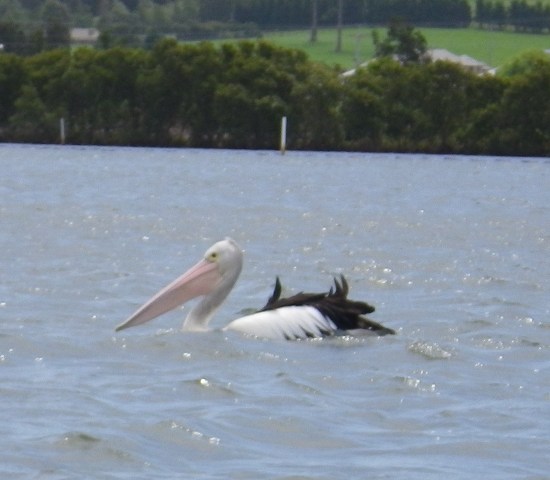 I've very fond of pelicans. I'm not sure if it's because if their beak (which holds more than it's belly can) or because of the book by Colin Thiele, and movie, Storm Boy. I suspect it's Storm Boy. If you have never seen it, have a look at this clip. It's a beautiful film from my childhood.

I spent many a weekend laying on a wharf trying to feed fish heads to the pelicans while my poor grandfather sweated blood that the pelicans would eat out arms off - or at least hook us and scratch us badly with that hook on their beak. I'm pleased to say we were never eaten or scratched!

I love watching them land on posts. They look like huge cumbersome jumbos and then they shilly and shally and calmly come in for the softest of landings. It never ceases to amaze me. 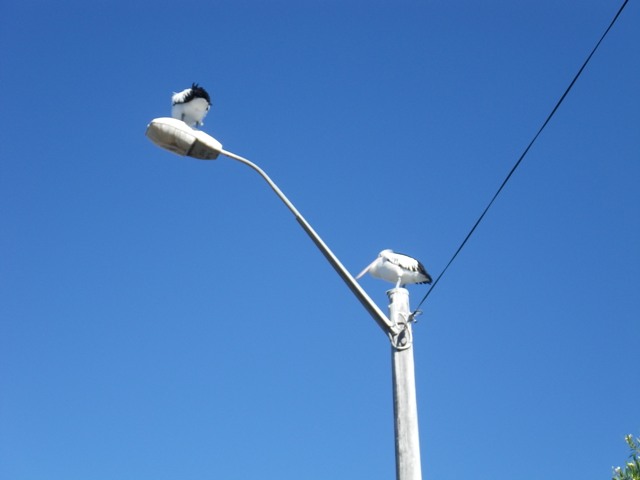 Taking off from the ground or water, they aren't quite so nifty. They seem to need a good big run up and a fair bit of huge wing flapping.

Here's some breeding info from the Birds in Backyards website.

Breeding depends on environmental conditions, particularly rainfall. Pelicans are colonial breeders with up to 40 000 individuals grouping on islands or secluded shores. Breeding begins with courtship. The female leads potential mates (two to eight or more) around the colony. As the males follow her in these walks, they threaten each other while swinging their open bills from side to side trying to attract the female's attention. The males may also pick up small objects, like sticks or dry fish, which they toss in the air and catch again, repeating the sequence several times.

Both sexes perform "pouch-rippling" in which they clap their bills shut several times a second and the pouch ripples like a flag in a strong breeze. As the courtship parade progresses, the males drop out one by one. Finally, after pursuits on land, water or in the air, only a single male is left. The female leads him to a potential nest site.

During the courtship period, the bill and pouch of the birds change colour dramatically. The forward half of the pouch becomes bright salmon pink, while the skin of the pouch in the throat region turns chrome yellow. Parts of the top and base of the bill change to cobalt blue, and a black diagonal strip appears from the base to the tip. This colour change is of short duration, the intensity usually subsiding by the time incubation starts.

The nest consists of a scrape in the ground prepared by the female. She digs the scrape with her bill and feet, and lines it with any scraps of vegetation or feathers within reach of the nest. Within three days egg-laying begins and eggs are laid two to three days apart. Both parents share incubation and the eggs are incubated on their feet.

The first-hatched chick is substantially larger than its siblings. It receives most of the food and may even attack and kill its nest mates. A newly hatched pelican has a large bill, bulging eyes, and skin that looks like small-grained bubble plastic. The skin around the face is mottled with varying degrees of black and the colour of the eyes varies from white to dark brown. This individual variation helps the parents to recognise their chick from hundreds of others.

The chicks leave their nests to form creches of up to 100 birds. They remain in creches for about two months, by the end of which they have learnt to fly and are fairly independent. Wild birds may live between ten and possibly 25 years or more.