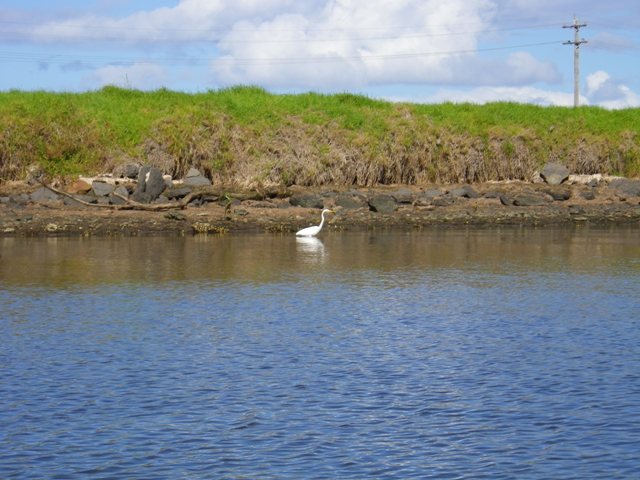 And once again, I snuck out of my backyard on to the river, but it's close!

Breeding occurs in colonies with other waterbirds. A scanty nest of sticks is built over water. Both sexes incubate the eggs. Before fledging, the young birds are able to climb around or roost in branches near the nest.

The Little Egret feeds on a wide variety of invertebrates, as well as fish and amphibians. The Little Egret hunts in shallow water by shuffling a foot to stir up aquatic prey, which it then takes in a lightning-fast movement. It also chases small fish with its wings raised.

If it's the Cattle Egret though, they eat: grasshoppers, especially during breeding season, but eats many other invertebrates. It also eats frogs, cane toads, lizards and some small mammals. Its sharp bill is used in a lunging and stabbing manner. It often feeds by following large animals such as cattle, grabbing insects and worms that they disturb with their feet. They also will sit on cattle to look out for insects.

Cattle Egret pairs are monogamous for the breeding season, and they breed in colonies, usually with other waterbirds. Their shallow platform nests are made in wetland areas in trees and bushes, usually as high up as possible. Both parents build the nest and incubate the eggs, with one brood per season being raised.

If you want more information, I found some here at the Birds in Backyards website.
Posted by Catherine at 12:00 AM