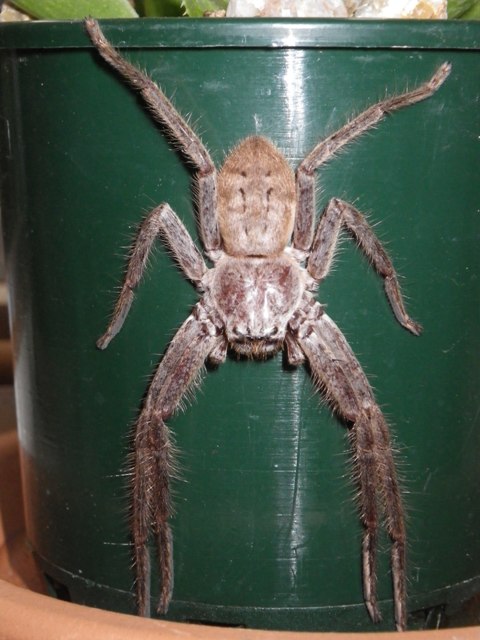 I hope you don't get creeped out by spider photos.

These spiders visit our house fairly commonly. When we first moved in, they were always here but less so now. My hubby is quite relieved by that - he hates them. To the point where I have to come and save him from them. My brother-in-law is the same. When they were visiting a huntsman was in their room. He bravely said to my sister, "I'll go get brave hubby." My sister laughed. "You'd better get Cate." Yep, brave hubby would only drown it in fly spray if he had to do anything.

Wow, there are 94 different species of Huntsman (so the Australian Museum website tells me). And my trusty insect book says you can tell a Huntsman as the two front pairs of legs are longer than the back two pairs (I didn't know that!). The come into houses during warm, moist weather and if you happen to get bitten, no toxicity symptoms follow.

Oh wow, I wouldn't mind seeing this (also from the Australian Museum website):

In the genus Isopoda, the male and female Huntsman spiders have a lengthy courtship, which involves mutual caresses, with the male drumming his palps on the trunk of a tree. He then inserts his palps into the female to fertilise her eggs. The male is rarely attacked, unlike some other species, and in fact many huntsman spiders live peacefully together in large colonies. A silken retreat is often built for egg laying, as well as for moulting.

That's kind of romantic, isn't it?