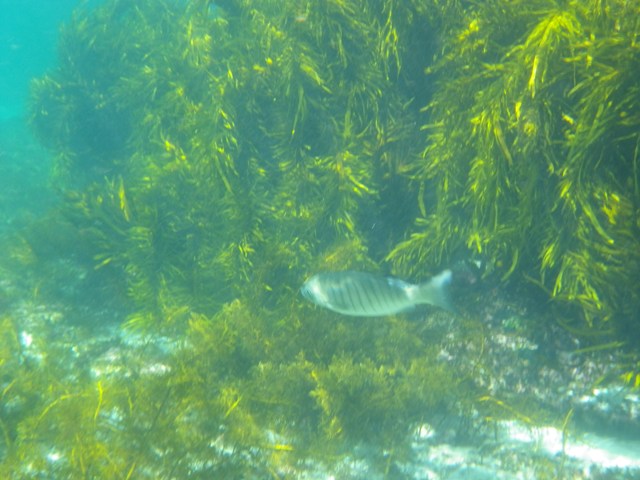 Luderick, or Black Fish. Photographed at the beautiful Hyams Beach at Jervis Bay. A perfect place to snorkel or swim.

I know this fish because he's my family fish. Let me explain. My grandfather and his father before him, all the brothers in those generations, my Dad and his brother and sister, myself and a cousin all go blackfishing. And this isn't just any old fishing - well, not in my family. It's an artform!

We holidayed with my grandparents every February for all my childhood. In fact, my grandparents were never alone when they holidayed as the whole extended family had allocated visiting times with them. It's just how they holidayed. So we drove and drove for hours to visit them (which is really only an hour and a half - it just seemed like forever as a car-sick kid) and we always had to take up green weed. Yep, seaweed (which helped so much with that car sickness!). Special green weed we spent ages hunting and then collecting and then laying out evenly on damp hessian bags.

When we got there, the Saturday morning was spent with my grandfather sorting the weed. I sat and watched while he teased weed apart and used some indecipherable system to separate "good" from "bad". The "bad" got chopped up into little pieces to make burly (this consisted of building a sand castle, my job, and sprinkling weed over it and then mixing it up. The burly was hurled out by the trowel-ful to attract fish when fishing). The "good" was used for bait - it was tied to the hook in such a way it made a long ribbon dangling in the water below the hook, which is how the fish like it. How my grandfather knew that I will never know!

For years, I did the weed culling, the sand castle building, the mixing, the packing of the boat - and I waved the men off to fish. You see, I had to be 13 years old to learn to black fish (some family tradition!).

And when I turned 13, off I went on my big adventure. It was seriously hard work. The rods were heirlooms and my beginner's rod was about fifteen foot long with this reel larger than my hand. The reel doesn't spool up and down like a normal fishing reel, it's just a big round wheel that you lay sideways and feed the line from. Then when you got a bite - known because you're very-difficult-to-see float bobbed in the water - you had to fling the rod backwards while you grabbed the line, thus jagging the hook in the fish's mouth. This is easy when you're tall and have big hands. At 13 I was short with little hands - actually much the same as now!

But even with these difficulties, I was hooked. Blackfishing is one of the joys in life. It's soothing, peaceful, quiet, filled with routine and tradition. And black fish make me think of my dad, my grandfather and the generations before him who lugged green weed to Woy Woy to go blackfishing!
Posted by Catherine at 12:00 AM