About 2 years ago, a friend gave me a deck of Angel cards while I housesat for her. I used them while I had days alone communing with myself and nature. I didn't understand them, but there was a sort of peacefulness in dealing cards, reading the little book, and working out if they meant something. I became somewhat addicted to this peaceful practice.

In the past Tarot had been a voodoo 'thing' that I'd steered well clear of. It was associated with fortune telling and all 'bad' things.

These cards were different to anything I'd seen before (e.g. the 'traditional' Rider-Waite deck on the left in the photo above) or been told. They were channelling images of Angels and unicorns and faery folk (pictured centre in image) and there was no fortune telling at all. Instead they were delving into me, poking at my thoughts about me, the world, life.

So began a practice that I'm still addicted to!

I then found a writer with a Tarot business (Weaver Tarot) and gave my friend a reading for her birthday. She raved and raved about the reading. As I thought I should have one, I was gifted one in a website promo. Aside from spending a lot of time talking about writing, Cat did a reading for me and used these Tarot cards that yelled at me from across the country (on the right in the top image). The symbolism in the cards were nothing like the Tarot cards I'd seen in the past, nothing like the Angel cards, and were something I could understand just by looking at them. On a gut-level, they spoke to me.

So I bought a deck of my own. The Mary-El Tarot deck.

And this weird thing has become even more addictive. I have another deck now that talks to me too (Tarot of the Crone), and not only that, it works with the first deck (middle picture).

Then I found a deck celebrating women, and I bought that too (last picture).

And I know I sound like a loopy person, and I know it's all weird and insane, but each morning I dig a little deeper in understanding myself as I flip a daily card from each deck and ponder how these cards relate to me, my life, my writing journey.

Have you ever used Tarot cards? Do you have a favourite deck, or symbol, or card? 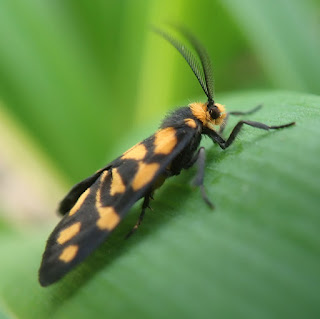 The eat nectar from wildflowers but also love lichen (an algae-fungi organism) and we've got heaps of lichen around our place. Mr E hates lichen and wants to bash it off everything, but I love it and keep telling him he can't! I don't think moth food will change the discussion any :)
Posted by Catherine at 12:00 AM No comments: