I've been having thoughts about Toxic Masculinity and I wanted to get them out of my head and ramble about them here.

Our patriarchal society has long bred this extreme form of masculinity by minimising/belittling the feminine. As the power of the feminine is rising, there is going to be some who wish to quash this as they still see feminine qualities/traits as secondary, lesser, less than them.

I think this is some of the force behind the changes in the world as I'm seeing it today.

COVID-19 has made the world stop. It's taken away a lot of structures that held the global economy (power) in place. It's highlighting aspects of society that aren't working. We are being forced to think about people (caring), health (nurturing), supporting those in need. These are all quite feminine traits (in the strict sense of the dual/polar society we live in). In the past, these traits have seen less pay for those in nursing and care professions. As a result of COVID, will we now begin to value these professions, and make changes to pay structures accordingly? It'll be fascinating to see.

The USA is another hotbed of issues. Minority groups are finding their voice. A man who I think exhibits many of the toxic masculine traits is refusing to accept loss, after years of having a place of power...where some believe he abused that office. It's an interesting power play to watch from afar - even though global repercussions may occur, and in that way I'm not so distant. To me, this situation embodies the global power play where masculine and feminine energies are reaching a new area of balance.

In the 1990s, I worked with a Canadian who was here to do her PhD or post-doc research. I remember her saying that in Canada, the power imbalance between men and women was not as obvious as she saw it here in Australia. I was shocked by that, I thought we weren't too bad. Then she said that it was far worse in the USA, which was one of the reason she'd come here. I didn't really understand what she was saying, never having spent any time in the USA and not having been to Canada, but 30 years later, I wonder if others have seen what she saw so long ago, and are trying to change that imbalance, not just in gender inequality.

I watched an interview (https://www.leeharrisenergy.com/podcast#section-1605132491191) recently with a woman (https://suzymiller.com/) working with autistic children. The data she gave about autism blew my mind. She said in the (I think) the 1980s, autism affected 1 in 10 000 children. Today, those figures are 1 in 54.

1 in 54? How did that change so drastically?

She said that generally, autistic children are more perceptive and intuitive (both traditionally feminine traits) and yet many are male children. She thinks that these children are here to help change the world. And I have to agree with her. If there are THAT many children who aren't 'fitting in' to societies' structures, then society structures will have to shift and change.

If these children are exhibiting more of the shunned feminine traits, then the masculine-feminine imbalance in society will need to shift to accommodate these drastic changes in the population.

I may not see this in my lifetime, but I hope I do. I think it'll happen quickly. These kids will need the world changed as they grow up and try to find a place in the world (within the next 20 years)... and there's a virus that's affecting the whole world and making us change how we work. How coincidental :)

I think this outrage we're seeing from so much of the toxic masculine energy, may be it's death throes. Although, it's persisted for a long long time. I hate saying it, but I think there may be more of a fight before the feminine can be balanced better. And yes, putting this in text, "out there" makes me a target, I know. I don't want to be a target. I don't want to poke my head up to be seen. But I also want to speak my truth, say what I see, have a little light shining from me. So these words are here.

I love this world. I love all the incredible, fascinating things about nature, the earth, people, animals, birds, insects, etc etc. I love the feel of the sunshine, the rain and the wind, of energy changing, of shifts and adjustments. I love the intellectual challenge of working out how and why. This is my little space to share myself. I love having it...even as it challenges me! 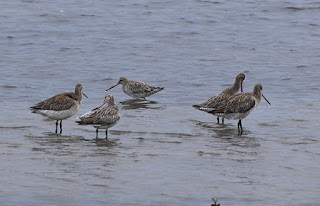 Our area has a "Bird Airport" - a park that has signs to inform people of the migratory shorebirds that frequent the area.

These birds have long been an exciting feature to me...but I haven't been able to document them with photos. They're not people-friendly. They keep their distance. If I take down binoculars I can see them in enough detail to work out what they are, but only if I write down what I see, or have my bird book with me (because by the time I've walked home, poof! all those details have gone from my brain).

This camera has allowed me to get photos so I can come home, open my bird book, and compare details for identification. And I've loved doing that!

So, I've been spending time with the Bar-tailed godwits (which had always been "maybe a godwit, maybe a sandpiper, I don't remember the details enough to know.")

You can read more about them here: https://birdlife.org.au/bird-profile/bar-tailed-godwit 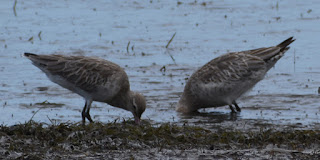 They migrate here from their northern breeding grounds - Alaska, Scandinavia, northern Asia - and spend the summer on the mudflats of Australia and New Zealand. They always seem to be such busy feeders, with their heads burrowing into the river flats, even through water. But now that I've been sitting and spending time observing them (and yes, stalking could be the word... it's been quite a bit of time!), I've noticed that much of their time is taken by preening and cleaning, washing and bathing. And when your feathers have to get you around the world twice each year, I guess you need them at their best.

It makes me realise how much I take my muscles and body for granted. I don't spend much time on ensuring my muscles can do all I need them to do, but take them for granted. I have been better in the past, but I need to do better.

Yoga is great and I've done a heap of 1-on-1 sessions during COVID lockdown. So I know what I need to do. I just need to do it. Stand in the crowd and do my preening, just like the gorgeous godwits. And here they are, preening and eating, bathing and enjoying the mudflats of the NSW south coast.

And we do have international tourists still arriving :) 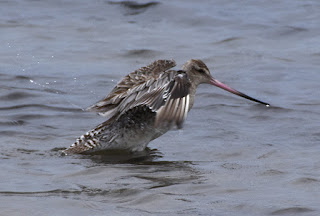 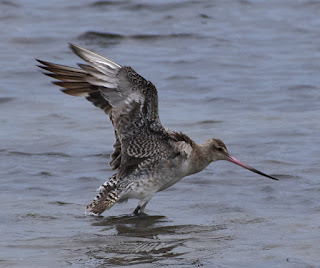 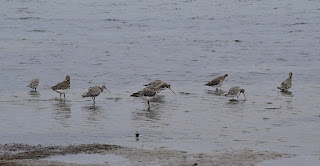 Posted by Catherine at 11:22 AM No comments:

After a year of posting Pockets of Joy, and realising that taking photographs brings me great peace, contentment and happiness, I decided to invest in myself (or Mr E did the investing) and buy a DSLR camera.

I LOVE my little Olympus, but it doesn't do birds. I wanted to take good bird photos and for that I need a bigger lens than a point-and-click has. So, behold some birds for my pleasure!

These are a favourite from my childhood and I took this one outside after finding it in my kitchen. I'm not sure how it got inside, but I wondered if it hatched in there and this was it's maiden flight, because it took a while to go and gave the most incredible shudder before it lifted off.

But enjoy, the Jaffa Moth :) 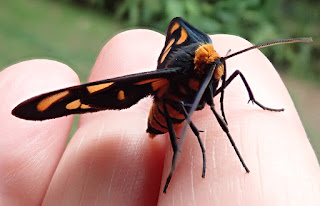 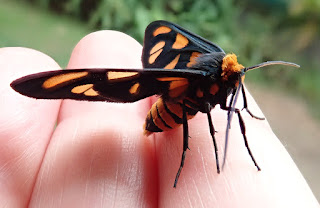 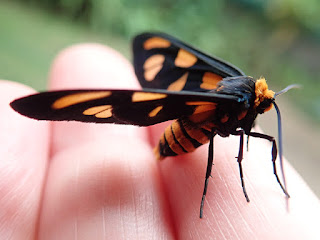 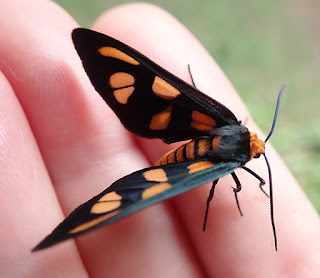