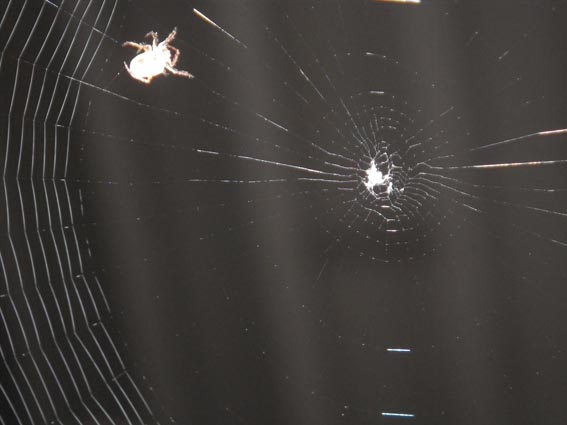 Another terrible photo, sorry, I tried hard. This little spider was on the opposite side of the web to me (and it was in the garden and I had no hope of getting around to his side without ruining his web) and he was weaving. He was racing around and around that web as fast as anything, little silk trail from his behind creating his concentric circles. I was fascinated. I don't think I've ever seen a spider weave as quickly as he did.

And... he's a mystery spider. Although, he could be an orb weaving spider of some sort, he has the right kind of body shape.

So... I'm learning that I know not much :) Lucky I got out of Environmental Biology! Did I tell you I was useless at keying out critters and plants for ID? (although I probably don't need to tell you - I've demonstrated it quite well!) The guy who was our prac tutor used to say "No" before I even opened my mouth to say what I thought it was!!
Posted by Catherine at 12:00 AM