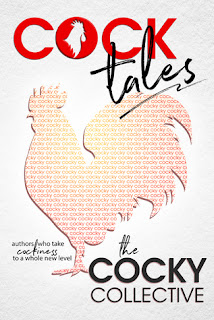 There's been a huge kerfuffle in the writing world which has quite significant implications if it's left unchecked. An author has decided to trademark a word. This sounds like nothing - but if it's successful, then it sets some ridiculous precedent where words may be copyrighted/trademarked and 'taken' from our vocabulary.

Maybe I've oversimplified the incident, but that's my understanding after a couple of weeks of trying to work out what the heck it all means!

In all the furor, some other authors have put together an ebook, and sales from this will be funded into an account to fight this legal battle.

There's something wonderful about people coming together to fight something they find is wrong.

So, do you have your copy of Cock Tales?

Are you supporting another cause to help someone?

Do you find these 'group collective efforts' heartening? 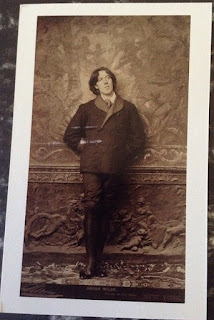 In my euphoria of last week, I showed off the photo of my ARRA trophy at Book Club.

I know! My Book Club of learned literary readers!

But... after me being so shy about telling them of my writing, they were brilliant about the trophy. I felt like a million bucks!

Then today, one of the lovely ladies in my group sent me this postcard - Oscar Wilde - with the message on the back being, "Congratulations! And may this be the first of many!"

I've been completely blown away by people's support. It's been incredibly reaffirming.

The impact of this has been incredible. Something I had no true comprehension of.

Thank you so very much ARRA, and my readers.

(I'll stop banging on about it now!)

PS I had another gorgeous card from a different Book Group. How I love readers xoxox
Posted by Catherine at 12:00 AM 2 comments:

I have this gorgeous tree in my front yard which I think is a spruce. I've been taking photos of different parts of it lately because it hides some gems - droplets of water, wasp nests, shining resin, amazing cones, and then I spied this tiny spider staring up at me from the end of a branch. 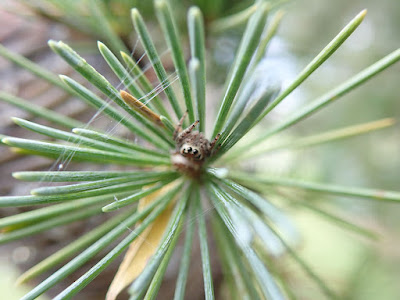 Posted by Catherine at 12:44 PM No comments:

There was a really interesting article on news.com.au this week about polyamory - you can read it here.

And if you're wondering how polyamory is different to polygamy, there's a great article here.

Simply, polyamory is about having many loving relationships, where all people understand that others are involved in your life. These relationships may not necessarily be sexual.

Polygamy is having more than one wife or husband at the same time.

The polyamory article was interesting because it focussed on the conversations and the discussions partners may have. Sure, sex was mentioned - it's a click bait article so it has to, right - but I thought this article didn't overly hammer that angle for a change :)

Polyamory (I'm going to call it poly) appeals to me, or makes sense to me. I don't believe that one person can give another everything they need, which I feel is the fable that's spun around monogamy.

When I lived in a small town, I had my regular husband (Mr E) and a friend from work who I laughingly called my Cultural Husband. Mr E doesn't do art shows or musical theatre. He'll go under sufferance but I know he's hating every moment and that makes me uncomfortable. So it was best if he stayed home and was happy. So when I wanted to go, I'd invite my Cultural Husband (who lived across a couple of paddocks) with Mr E's full approval and relief. I'd never have termed us poly, but I guess, by definition, it sort of was that kind of a relationship. Everyone knew about everyone else, everything was upfront and discussed, both men got along well (when not at events they didn't like!).

I enjoy having D&M discussions with people about shared interests. I don't have a problem talking with men or women. Over my life, there have been quite a lot of people who've taken issue to me spending time with their partner/friend/associate. It's always disappointed me when people assume you can't have discussions/friendships without sex being involved. I think that's why I really enjoyed this article.

How do you feel about polyamory?
Posted by Catherine at 12:00 AM No comments: 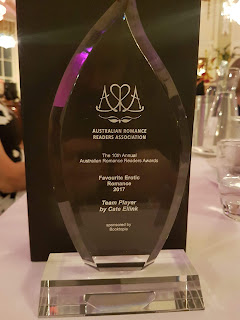 I'll have to dig out my 2003 trophy (that's buried in a filing cabinet) and place it with this beauty. I'll have to remain mindful of the pride and joy associated with each achievement, separate to sad events that surround each award.
Posted by Catherine at 12:00 AM No comments: 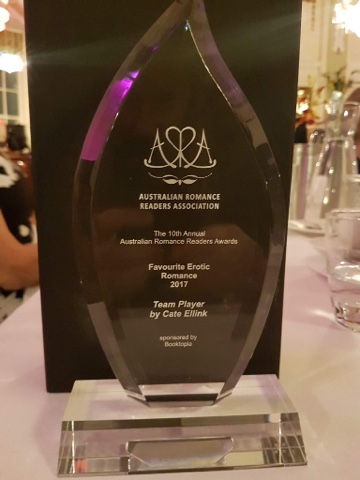 Thank you ARRA, Booktopia and readers. Tomorrow I might find words (some added now).


I wasn't able to attend the ARRA Awards Night because the other me had agreed to speak at the Sydney Writers Festival Live And Local event at Wollongong. My local ARRA member

And then my book was a finalist. The lovely Diane tried to change my speaking time, but it meant changing the whole program. I decided to stay with my commitment and miss the Awards Dinner. Then Diane asked me for a speech - in case I won. I laughed but wrote words because she was being good enough to humor me - and represent me.

Today I had to go and find what I'd asked her to say because I had no memory of what I'd written. So while my thoughts are still so jumbled, here are those words.

ARRA for fabulous events like the Awards and for their huge support of authors.

Booktopia for sponsoring this award.

Kate Cuthbert for her incredible self, her support and encouragement.

My writing friends and family who are only ever an email away and always get me out of trouble!

My family, especially my hubby, who manages to cope with not only my writing but this Cate, who none of them are very comfortable knowing!

Diane who’s representing me tonight after organising for me to give a talk today at a South Coast Writing Centre event. She’s great at prodding me when I’d rather stay in my cave!

Thank you to everyone who read and/or voted for Team Player, or JA Low’s Sapphire, or Vi Keeland’s Egomaniac, or Penelope Ward’s Mack Daddy. Authors love our readers.

Thank you!
Posted by Cate Ellink at 9:12 PM No comments: