Here are a few pics of the critters about at the moment.

Obviously, I can only take photos of ducks in a row - I can't get myself sorted at all!

Posted by Catherine at 9:33 AM No comments:

Oh boy, it's been another huge break from here. I have no clue where the time vanishes to!

Here are some photos from yesterday...just so I can keep this blog going until I get myself writing again, or find words, or whatever is missing. 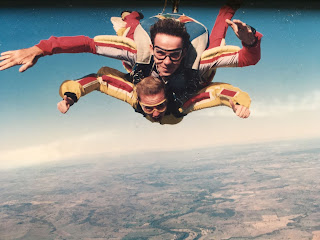 When I went on a writing retreat... way back, months ago... I started another story in the Glebe Gannets series (Team Player was the first one, and so far the only one). This one is about an older woman and a young footy player. He doesn't fit society norms - and I don't wnat to give him a label.

I've got a notebook filled with scribble, and last night I managed to sit and type some. I was thinking about societal standards and conventions when a Rugby League story ran across my twitter feed and got me thinking.

I grew up in a time when societal conventions were quite strongly adhered to - although they were breaking apart. I was someone who questioned all these stupid standards that stopped me doing things, so I've not been good at knowing what these standards are or caring too much about them. However, most of my family group and many friends, care deeply about them.

As I wrote this story, Ashton has no clue about standards and is questioning Angie all the time about "why?" His questioning makes her question too. So she's coming to realisations as she patiently explains things, and sees how silly her explanations become.

This is kind of where I think we are in a society too. There is a generation of youth who don't really understand or give a shit about convention. There are an older generation who hold dearly to convention and will die defending them. Then there's a bunch of us in the middle who have started dismantling, and can see both sides.

And back to the Rugby League story. A female Indigenous player made some social media posts (I haven't seen them) about the Queen's death that offended many people. She's been penalised for this. One journalist went so far as to call this 'the most reprehensible thing in Rugby League'.

The most reprehensible thing? Lordy! After some of the things that have happened in rugby league, I think that's a ridiculous call. But anyway...I'm not going to delve into that.

I think this is a case where societal conventions are confused by social media.

In the collective of society, the Queen's death has been mourned across the world, with the media saturation and perpetuation of the grief incredible.

If you're someone who ignores the media (as in news, commercial media, etc) and has social media as your point of reference, then the people who are in your social media 'group' are the ones you take your cues from. They're the ones who are setting your societal conventions, so to speak.

I have a wide mix of people in my social media feeds and I skim it rather than devour it. So I see a lot of varying views. And I like that. I like to think about things from different perspectives, and develop my own thoughts (or open my mind to other ideas). There was a huge outpouring of grief for the death, but I also saw a lot of people who were not grieving at all and saw this as a time of change.

At present, the wider narrative is about the grief, sadness, loss and what a wonderful woman. The world media has ensured that. But what if your social feed was not showing that? How would you know?

Societal conventions are constructions that exist because it's a majority held belief. There is always going to be people opposing every convention (I think that's human nature).

How do we deal with these people? In most cases, they're punished for not conforming.

I'm not sure that we should be dealing out punishment for non-conformity.

And that's where Angie and Ash's book lies... me treading a path of non-conformity, and wondering if I've gone too far! Maybe that's why I'm struggling to write.

Hmmmfff...I just hit myself in the face with that thought! That is most likely the case. Every idea I have at the moment is treading a fine line in non-conforming. I'm struggling with myself as to whether or not I should "go there". Huh!?!?! This is almost three years of mulling and I think I've finally seen what my 'unable to write' problem is.

Fearless Friday needs to be Fearless every day.

Thanks for reading the thoughst of my rambling mind.

How on earth do months vanish? How have I gone from blogging 3 times a week to once every 3 months?

I don't know what's happening to me but I cannot fit everything in. I'm not even sure what I've taken on that is taking up my time...but it's a struggle to get through what I need to do, without getting too caught up in the want to do list.

When I do up my bills, I see that work has increased. That's a good thing for my debts, bills, and expenses :) but not so good for my mental health and sanity!

I've probably been walking and taking photos more too. When work makes me cranky, I grab my backpack (camera bag) and off I hike. I come back ready to face whatever crazy task I have to do.

I have a few scribbled words still happening when I get a chance.

I haven't typed up a whole notebook of scribbled story from my retreat...but it's on my To Do list (the Want one, but maybe I need to move it to the Need one!).

How are you doing? 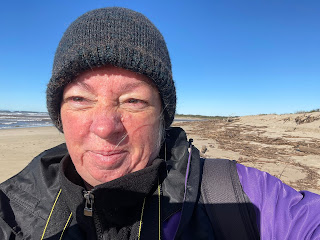 Here I am on a walk on the poor flood affected beach near home. It's winter and a cold wind, even if the sun is shining!