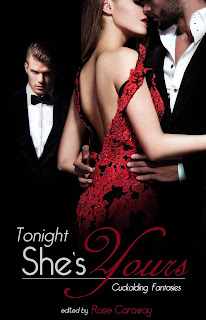 But there's one with two women, and the husband watching, but it took me a while to realise the Bull was female. So that was fun!

I've noticed that most are in first person and there's a varying degree of depth into the character's mind in these first person narratives. So that's been fascinating to discover.

Oh, yes, the fantasies, not the writing... I keep being distracted!

There's a few multiple partners while the husband watches.

The humiliation in most isn't too awful, so I can handle that. That's the thing that's always baffled me - humiliation for kicks - but I'm coping with these. And mostly they're mild - or else my level of tolerance has been expanded!

I've enjoyed the mix of stories in here...but they have shown that I need to twist my stories more. Deliver more of the unexpected, and less of what the majority deliver.

Do you get inspired to change when you read anthologies?
Posted by Catherine at 12:00 AM