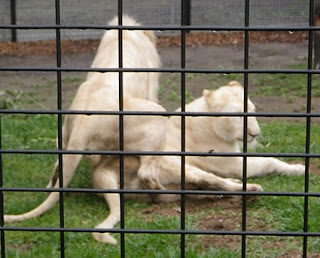 The Shoalhaven Zoo has some new white lions - 2 females, 2 males - and so I went to visit them the other day. How lucky for me they were putting on this display! :) Not so lucky for the people with kids who asked questions.

Anyway, I snapped this pic as we walked up, rubbing my hands with glee because it covered Phallic Friday and Wildlife Wednesday, and then I looked a little more closely.

They were young lions. He hadn't grown into his mane yet.

Then I realised they were brother and sister - the four lions are from the one litter. So this shot isn't quite as exciting as I initially thought.

We had a dog who used to hump almost anything while he was young (thankfully he grew out of it). Horses often do this too. But I'm thinking that it might be a testosterone-laden thing where you need to learn this mating right by practicing humping when you're young. Especially with these competitive species like lions.

Anyway, those are my thoughts for today. Do you know anything about lions learning about sex?