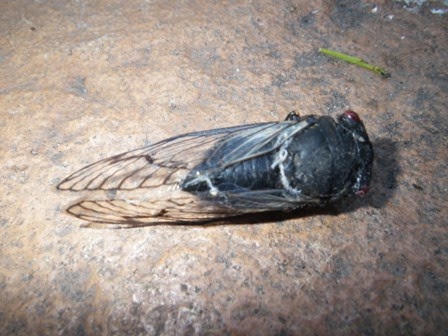 Cicadas are the sound of summer in Australia - and we've just moved into summer!

This is a Black Prince cicada, well, that's what I call them! They were the prized catch when I was a kid. This one is a little worse for wear - but I don't have a tree nearby that has cicadas on them at a level I can get to!

We had some we called "piss whackers" - they were the ones that peed on you when you picked them up. No idea if it was pee though! It was probably sap that they'd been sucking from the trees.

Adult cicadas only live for a few weeks. Only the males sing - it's their mating call. They can live underground for years (6-7 years) before they 'hatch' and become adults. Cicada shells are awesome! (I gave a boxful to my Pop once for Christmas - no idea what he did with them!!).

In North America, the periodic cicadas can live underground for 17 years!

After mating, the adult female cicada lays its eggs. It does this by piercing plant stems with its ovipositor (egg-laying spike at the tip of the abdomen) and inserting the eggs into the slits it has made. The eggs hatch into small wingless cicadas which are known as nymphs. They fall to the ground and burrow below the surface. Here they live on the sap from plant roots for a period which may last several years. They shed their skin at intervals as they grow.

When the nymph reaches full size it digs its way to the surface with its front legs, which are specially adapted for digging. It generally surfaces about nightfall in late spring or early summer. The nymph then climbs on to a tree trunk or other object and sheds its skin for the last time. The fully-winged adult cicada which emerges leaves its old empty nymphal skin behind.


I heard on the radio last weekend a woman complaining about the deafening noise of cicadas and asking how she could kill them! The guys on the radio were horrified, as was I. Are you a fan of cicadas?
Posted by Catherine at 5:15 PM