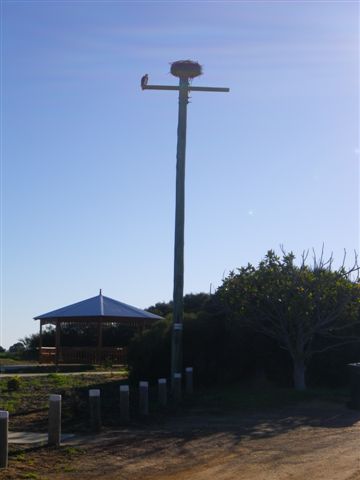 On our recent Western Australia holiday, Mr E spied this Sea Eagle nest and pair. In many of the towns, there seemed to be roosting pads on the top of poles especially for nests, which is a fabulous idea (actually, I think WA had some brilliant eco-friendly ideas).

It's called the White-Breasted Sea-Eagle, and also the white-bellied sea-eagle, the white-breasted fish-hawk. It is on the threatened species list in many of the eastern Australian states, with an estimate of only 500 pairs in Australia in the wild.

The White-bellied Sea-Eagle is found in coastal habitats (especially those close to the sea-shore) and around terrestrial wetlands in tropical and temperate regions of mainland Australia and its offshore islands. The habitats occupied by the sea-eagle are characterised by the presence of large areas of open water (larger rivers, swamps, lakes, the sea). Birds have been recorded in (or flying over) a variety of terrestrial habitats. 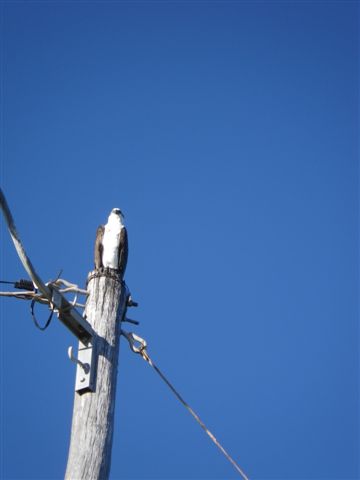 The birds can live for up to 30 years, although there's a high mortality rate amongst the young. They breed in solitary and monogamous pairs that mate for life. However, if one member of the pair dies, it is quickly replaced.

Egg incubation lasts 6 weeks and is mostly carried out by the female, however both pairs feed the young who remain in the nest for 65-70 days. They are fed for 3 months after being fledged (taught to fly/kicked out of nest), and after another month, are chased out of the pair's breeding ground.

They feed opportunistically on a variety of fish, birds, reptiles, mammals and crustaceans, and on carrion and offal. They hunt from on high, swooping in for their prey (unless they're the carrion or offal!).

They're quite magnificent birds. We have a few on the river near here too and I always love seeing them. They're so haughty and majestic.
Posted by Catherine at 12:00 AM