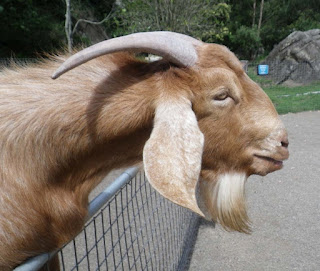 Back to the zoo this week, to talk about goats.

I have a soft spot for goats (and it has nothing to do with me being a goat in the Chinese Year thing!). I think they're intelligent and funny. They always have wild characters.

At the local zoo, there's a herd of goats. There are always a bunch of kids, a big bossy bloke (or a few), and a lot of milder mannered nannies. This one (pictured) was one of the bossy blokes, but he was a polite alpha, not an obnoxious one :) I like their structural hierarchies, where kids are brought into line even though they're allowed to show character and pushiness to a degree. They're cool.

I have farming friends who caught wild goats to supplement their income in a drought when the farm wasn't producing. I think in drought times, goats have kept many a farmer out west in a bit of money.

There are quite a lot of wild goats in western NSW. Some years back (2013) we were driving to Tibooburra in NW NSW and there were heaps of wild goats.

I'd been there before in the early 1990s and again in 2004. Both my early visits the town was in drought - oh, we broke it in the 1990s and got stuck there, but that's another story. There were nowhere near as many goats in those visits but in 2013 the number of wild goats on the roadside (and some playing chicken with the vehicles) was astounding.

When we got to town and were talking to the National Parks Ranger, I asked if it was a good year but she told me it was dry. Which didn't make sense to me, because the roadside vegetation looked plentiful and the goats were dense. Then I asked if the previous years had been good. And yes, they had been.

In the good years, the wild goat population exploded because feed was plentiful and farmers weren't actively killing/capturing them. But as the feed dried off and goats were hunted out of paddocks by farmers or their livestock, they became abundant along the roads. I imagine as it got drier, enterprising farmers would round them up and take them to the saleyards. The population would stabilise to a low level that could manage to survive the dry years ahead.

Enterprising beasts, goats (and farmers) :)
Posted by Catherine at 12:00 AM