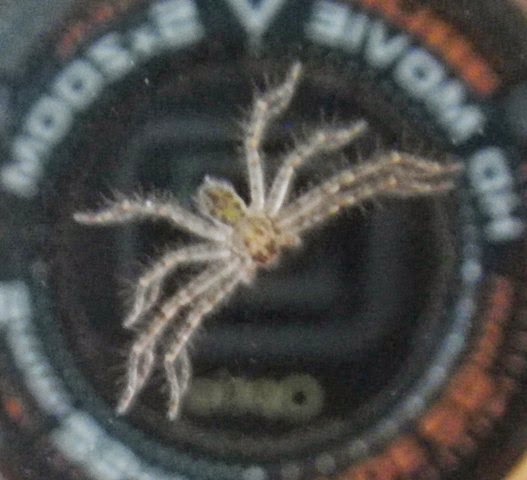 Mr E taped this awesome show that was on sometime ago called Spider House. It was a BBC program so not a lot of our spiders, but an unreal program just the same.

During the second part, they talked spider sex and babies. They showed lots of baby spiders emerging from their cocoon/sac, which maybe got my eye in for looking for baby spiders. It's the baby time of year and in the next two days after seeing the show, I found 2 babies. This one I managed to photograph, even if it's a completely weird image! Let me explain :)

The spider is on a mirror. So I got my little camera right up close, and got a shot of the spider and my camera. That part of my camera is 2 cm across, so the baby's little. And he looks really coloured here but to the naked eye, he was like a spider husk. That's how I found it. I thought it was the dead spider and I blew it, but it scurried away! I think it's a baby huntsman, we get a few of them in our house.

On the Spider House show, they showed lots of webs and discussed web building and even dissected a dead spider to examine the spinnerets inside it's abdomen. It was fascinating. I didn't realise that spiders produce at least 4 different types of silk that have different roles in web building and prey capture. There's really high tensile silk that makes the anchor points for the web, then a lighter silk to make the initial circuits to bed down the shape/space, then a tougher, stickier silk to weave the web, and also a different lighter/finer silk to capture prey and house their eggs.

If you get to see the show, it's really worthwhile. But if you're not fond of spiders, they do lots and lots of close ups!!
Posted by Catherine at 12:00 AM