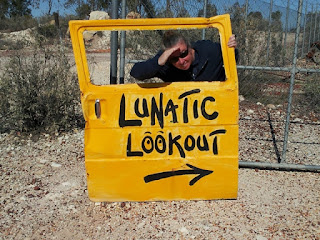 Since Jan 2011 when I first had a story published, I've been wrestling with so many things. I'm a natural born worrier...or so I've told myself. But in the past year, as I've done all sorts of 'weird shit' to try to get healthy, I'm beginning to realise I was never a worrier as a kid - that's come as I've grown up and been expected to fit a certain mould and it hasn't fitted me well. That's why there are two of me in my writing life - Cate who says what she feels, and Catherine who is circumspect and does what she's been told is right.

Which me is me?

I think Cate is more of the true me - the one's been tucked deep inside because she's not quite what society/people/friends/family expect.

Catherine is me too. I'm not for a minute saying she isn't. It's just that Catherine has tried to mould to fit in. She's careful and considered, second guessing everything, over thinking everything, and ultimately getting sick doing all that.

So, childhood me was always pushing boundaries, asking questions about why things were done in such a way, writing letters to object to things, begging to be allowed to do things that weren't allowed (not that it worked, ever!). I was insatiably curious, couldn't consume enough knowledge, wanted to talk with and question everyone. Was eager to discover why everyone didn't have the same interests as me.

When I was heading to high school, Skylab was falling. It was a monumental thing in my life. I tracked it every evening, often with Dad. Read about it in the newspaper and kept an ear on every news story about it. Would it fall in Australia? Would it wipe out people? If so, what then would happen to the space program? There were so many questions. I went to the high school interview and they asked me a question about current affairs - I can't remember exactly what it was, but probably something like, 'tell us something you're interested in at the moment' or 'what event most interests you from the news'. I went into a Skylab discussion...oh, no, monologue. The Principal of the high school my parents were going to send me to, had no knowledge of Skylab. When we left that interview, I asked to attend a different school. That didn't happen, I went there. In Yr 12, I sat my Physics HSC practice exam and my elective was not in the questions. 30% of my mark, did not exist. Fuck! I'd spent a term studying a syllabus that didn't exist. That's how much attention they paid to science - and my life was science.

These are the 'little' things that happen over and over as you grow up that change you from a confident, wild kid to someone who becomes a conforming adult (or ends up in gaol/jail, or unhealthy, or crazy or dead).

I'm looking at 3 boys I know who are 11 at the moment. I see their insatiable curiosity, their thirst for knowledge, their desire to stretch themselves into areas of interest where schools would rather limit them, and it makes me depressed. Sad that society can quelch...no, not 'can', that's too soft. Society demands that they limit themselves. Sure, if you're in the top 1%, you can be a genius... but if you're up there but not right up there, you just have to be average.

What worries me more, how do the kids who are below average go? Do they get lost in the struggle? Where do they end up?

Anyway, enough backstory. It's time for me to be fearless, like I was as a kid. To shed all the shit I've picked up along life, and find the true inner me. The kid with the wicked sense of humour. The kid who loved information and knowledge. The kid who asked questions. The kid who was proud and confident and didn't realise that adults judged. The kid who got hit down, dusted herself off and kept on playing.

And in non-kid terms, that means, it's time for Cate to be unapologetically me.

I know I've said this before, or probably hinted at it rather than been committed to blurting and doing. So why's this time different?

I feel well - or more well than I have in 12 years. Because I'm not fighting a health battle, I feel like I can fight for myself. I feel I have confidence to face life.

In writing terms, it means I'm going to write my books, hard. I've asked a beta reader if she would work with me to make my books stronger, more romance-reader-friendly. She now has a bundle of my short stories to look at and give feedback. I've done up some covers. In 2019, I'll start self publishing them.

I'm going take control of Cate Ellink's career and work it as hard as I can. I'm going to face my fear of promo and publicity (I hope!). I'm going to try to be more focussed and planned (even though I suck at that too usually - but maybe that's a learned thing and kid-me wasn't so worried about plans turning to shit).

I'm going to try to blog here about Fears. All sorts of fears.

I'll also try to blog about the 'weird shit' I've been doing.

And I'll try to be brave and honest and to hell with society's expectations.

If school kids can protest for Climate Change, I can stick my head up in my little blog corner and do something too.

I'm writing this so I'm held accountable. So my thoughts are recorded somewhere 'public'. If I fail, please point me back to this me who was brave :)

Wish me luck. And please feel free to join with me, discuss with me, share knowledge with me.

On to the next 12 months of FEARLESSNESS