After the NRL Grand Final 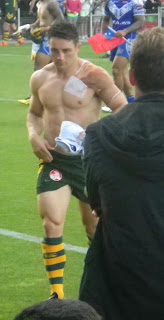 A friend asked me how I felt about Cooper Cronk playing when injured, in last Sunday’s NRL Grand Final. It’s a good question. Of course, I was glad he was playing because I want to watch the best in a Grand Final - same as I was happy Billy Slater was also playing. I believed the torn rotator cuff story, so I always thought Coops would play. At the beginning of the game, he looked like he had some movement in his arm and that was good. By the end of the game, I was glad they took him off the field. When Boyd Cordner said that Cronk had played with a broken scapula, I almost fell off the chair. How on God’s earth could somebody play with that?

Mental toughness is something I’ve always associated with Cronk. Last year, when he was leaving the Storm, he said something that changed my life, strangely enough. He said every time he got emotional about leaving he’d just bring himself back to the present moment and centre himself again. Maybe they weren't the exact words, but that’s what I remember. To me, he spoke of mindfulness—something I’d always struggled with, alongside meditation. I then picked up a book on mindfulness and read it with new eyes. I began to change, become well. And that makes no sense whatsoever … but I’m crediting Cooper Cronk with that change in mindset.

When you’re good at mindfulness and meditation, it is supposed to allow you to minimise pain (among other things). By limiting pain, you can focus on your body and help it heal. For Coops to play 78 minutes of football, and make those seven tackles, is nothing short of incredible. How far along the mindfulness journey is he?

I struggled with those questions. I searched online for articles so I could have some answers. In my mind Cooper Cronk isn’t somebody who would play with serious injury, putting himself in jeopardy, or his team. But I had no evidence for that except my own gut feeling and when someone is your hero, gut feelings get mixed up with your own expectations. Pedestals are pretty rocky places!

In my scrolling through articles, of which there were many, I found that the pedestal rocked but didn’t topple. Thank goodness! 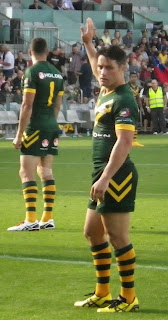 The Roosters’ medical team was said to have scoured the Internet and the world looking for answers to the questions they had. All this while keeping the injury a secret. It’s quite incredible that they could do that and the media didn’t get a whiff of the story. When you read about what they did, how they got x-rays, ultrasounds and MRIs, to pinpoint the diagnosis and injury site, it’s rather incredible. The Roosters’ Dr said that the injury could not have gotten worse by playing and I think that’s a telling factor. It’s a shame that major detail was lost in a late paragraph of one article. That information should be front and centre, so kids know that even though it was a man’s decision to play in the Grand Final, it was backed up by doctors’ advice that the injury couldn’t get worse.

In the State of Origin in 2016, I think, Coops broke his wrist, and came off the field immediately. That injury healed far quicker than anyone imagined, and at the time everybody said how amazing his recovery had been and how much time he put into that injury to heal it. That doesn’t seem to have come to light again and yet that’s another important factor. Cronk knows his body, he knows what he can push through and what can’t. When he broke his wrist, he was off before the trainers got to him. He knew he couldn't continue to play - this time, same bloke, different injury, and different story.

Another important factor is his position in that club. The medical staff went all out to make sure this guy could not play. They weren’t going to rule him out without being absolutely certain. To me, that shows the influence he has on that team, and the need they had for him.

He played 40 minutes in the week before’s Final with the injury, where his teammates protected him, covered for him, and looked out for him. At the end of that game, Joseph Manu said that he’d done everything he could to protect Coops. For teammates to do that, your presence must be important. In the Grand Final, this happened even more. Cronk may have been there directing play, taking the heat off people, and in cover defense, but every other person in that team did more than their job to ensure that he could be there in that limited role. I don’t think that’s something many people would inspire.

At the end of the game, there was something different about Roosters Cronk compared with Storm Cronk. Storm Cronk seemed that little bit aloof, held back from people, at least in the public eye. Roosters Cronk was a little bit like that, but then he got pulled into the middle of that Roosters team, he wasn’t on the outside, he wasn’t on the edge, he was right in the middle. In going somewhere new, maybe that’s what has to happen. You have to make new friends, you have to fit in, you have to link and make links with every person. When you’re established, you have your crowd and you can extend a welcome to new people, but you’re established you don’t have to make the huge number of connections to fit right in. 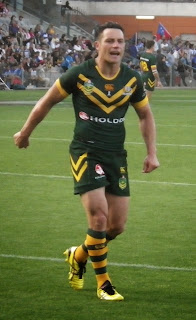 I think that’s the most incredible thing about Cooper Cronk. I wondered how he’d fit in with the new team, a new bunch of blokes who seemed so different to the ones he played with in Melbourne. For him to have forged the bonds we saw on Sunday—bonds so strong that people will cover for you, protect you, and look after you—is something quite phenomenal. To achieve that in 12 months blows my mind. I think the calibre of the man, not just the footballer, has been shown with this move to Sydney.

And then there’s the comment he made about his wife, Tara, which was beautiful. He claimed that she pushed him to play, pointing out how important another Grand Final was to him. The strength, then, of that woman is also phenomenal. I suspect she’s a large part of the reason why he continued to play after his move to Sydney. I think she may have known he wouldn’t be happy retiring before his time.

In a post-match interview he said the Storm had created him into the player, and person, he is now but that the Roosters had allowed him to have a family and move to Sydney. What a fabulous way to look at major changes in life, especially when you have to beat your mates to succeed.

There’s bravery in starting over, especially when you’ve been at the top. But conquering that fear, and coming out on top, like he has, is incredibly inspiring.

Although a part of me thinks it’s crazy to play in the Grand Final with a broken scapula, I will never forget that he did. I will never forget what that shows. I’ve used him as a hero in many of my stories, but I’ve never made him heroic enough. Sometimes real life is better than fiction—and with Cooper Cronk and Tara, I need to step up my game. He’s my hero and she’s fast joining him. Hope to God they never fall off that pedestal!
Posted by Catherine at 9:03 PM