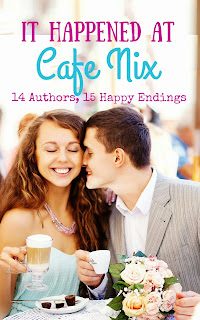 Did you know I wrote an epilogue for Deep Diving? It's in a little book called It Happened At Cafe Nix, which is a story set in a Cafe, where a whole heap of Escape authors introduce their characters through epilogues or prologues or deleted scenes or related scenes. It's a great way to 'meet' new authors and sample their writing - as well as being an awesome story by itself.

So, why am I telling you this?

Because I wanted to show the photo in this tweet. It's clean, so it's safe to click. It's a couple of Storm players, one with his baby and another greeting the child.

Not this photo exactly, but photos similar to this were a bit of an inspiration for the Cooper Sterling character in Deep Diving. You don't often see men-who-aren't-dads, especially footy players, interacting with kids, and it melts my heart.

So that's why Cooper Sterling doesn't worry when Sam wants a child. He loves kids. And in the epilogue, when he's holding the baby in the Cafe and being the adoring Dad...this is the sort of photo I had in my head.

Anyway, that's my gratuitous post for the month. You'd think I'd move on, wouldn't you?

If you're interested in reading It Happened At Cafe Nix, you can find it:

NB It's minimal cost at Amazon, but free elsewhere