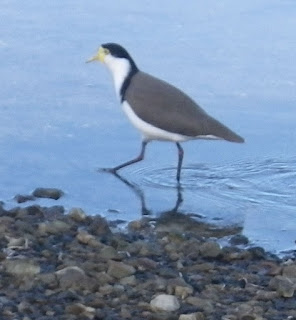 Masked Plovers are also known as Spur Winged Plovers and Masked Lapwings. They aren't sea birds but they do forage along the shallows. We had them when we were in inland NSW, so they're by no means associated with the coast. They're mostly associated with grasslands.

They're pretty funny birds. We seem to always have some residents that live around our house wherever we live. The ones here have raised at least 3 batches of chicks in 6 years, but I'm not sure how the chicks went once they moved from our immediate house and surrounds. Last year they laid their eggs on our roof!! Now that was noisy :)

A pair mate and share duties at incubating and rearing the chicks. If in danger, one of the pair often tries a distraction away from where their eggs/chicks are, while the other runs around also causing distraction but close enough for protection too.

On their wings, at the front where it bends like an 'elbow' they have a little yellow hook, which is the spur from where they get their name. They use this for defense, but it's rare that people get caught by it.

The chicks are fluffy little downy balls on long skinny legs. I'll try to dig up a photo because I'm sure I've got some of them in the yard. The parents are really protective of the little ones, because they can't fly. They run fast and huddle under the parent's wings. And they run on command. A sharp yell from a parent and the chicks obey as fast as anything. They were lots of fun for the few days the parents allowed them to stay in my yard.