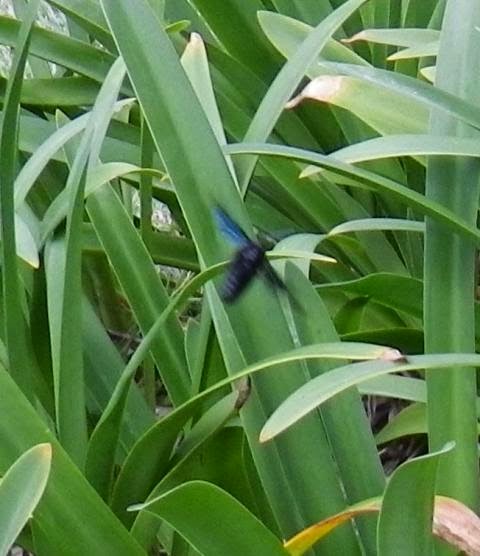 More unknowns...I told you last week I thought it was deliberate, that the insects are ganging up on me!

These ones are beautiful and intriguing. And Mr E noticed and commented on them, so they must be more than your average beetle!

In the front yard we have a strip of agapanthus instead of a fence. Close to the letterbox is one bed, then there's a small gap to the other bed (no idea why, they were there when we moved here!). These blue-black beetles with bright blue-purple wings are zooming around the bed closest to the letterbox and not the other bed. Why? Who knows!

I stood out there trying to get a photo for a while (10 minutes or more) and took maybe 20 photos before I snared these 3 (by putting the camera on sports mode). These bugs do not stop. Well, one did, for about a second near my foot but all I got was a photo of grass.

They're not small, maybe 3 cm long. They're extremely noticeable ... but almost impossible to see clearly. There are about 5 of them out there and they've been there for a week.

I've never seen anything that colour before, or that size. 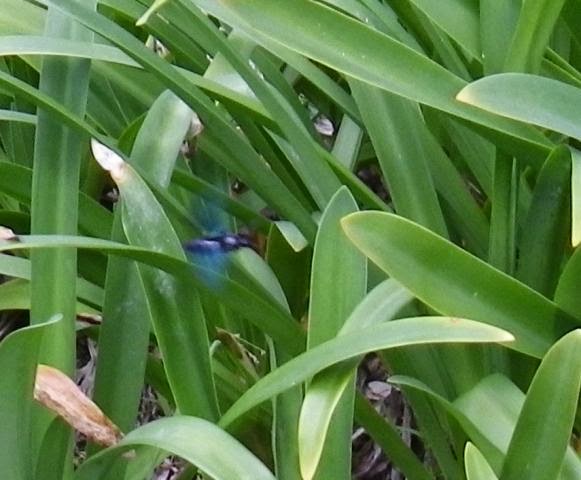 Not even sure what to Google about them...but I'll try blue bug. I'm not even sure if they're a beetle or a bug or a fly. The photos don't clearly show a hard carapace (shell) that might cover the wings, so it may not be a beetle, but often you can't see them in flight.

Oh, good grief! I think blue flying bug found it for me!

I first found this on a gardening forum - Midgin, they are Black Flower Wasps (Discolia soror) their wings are iridescent blue.
They are native solitary wasps and at this time of year you often see them hovering around compost heaps and lawns, they also feed on nectar.....the female wasp burrows onto the soil to locate beetle larvae..(curl grubs etc) which she stings then lays an egg on, the larvae of the wasp then has a food source until the following season when it emerges from underground, so are useful predators to have around.
They can sting but are usually not aggressive.

Then I found the Victoria Museum had information -
WOW... I love Google :) I love doing this post so I find out what these things are. I'm off to ogle them again now!