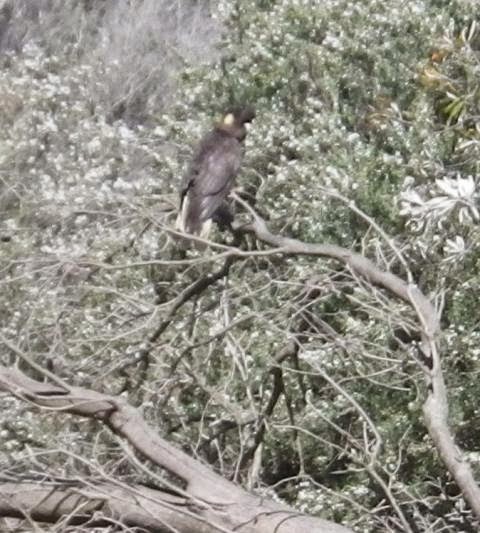 These guys are around at the moment and boy, do they have a screech. They sound like a kid being killed! It's the most awful sound, high pitched and like it's being a strangled. They feed in a neighbour's tree and so a flock will come across, screeching, and then they all land to feed. That screeching has had me up a few times to see what's wrong. It's spine-chilling!

I don't know much about these guys but the Australian Museum site says they're in decline because of habitat loss, causing decrease in food supply and loss of breeding nest sites.

From the Birds in Backyards website, it says, "Yellow-tailed Black-Cockatoos have a long breeding season, which varies throughout their range. Both sexes construct the nest, which is a large tree hollow, lined with wood chips. The female alone incubates the eggs, while the male supplies her with food. Usually only one chick survives, and this will stay in the care of its parents for about six months."

Okay, so none of the sites say anything about their call being how I described it. Maybe it's my over-active imagination :)
Posted by Catherine at 12:00 AM