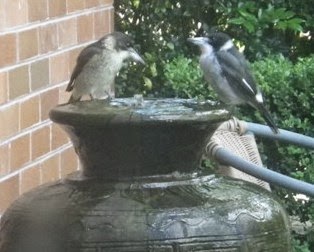 These two Grey Butcherbirds visit my dad's place to have a bit of a drink and a bath in his fountain.

Butcherbirds belong to the same family as Magpies and Currawongs, but are smaller in size.

They're named Butcherbirds because of their usual method if dealing with prey - items too large to swallow are dismembered after being wedged in a tree fork, fence wires, clothes line or similar. They have also been seen to cache food like beetles and lizard remains in tree cavities.

They aren't gregarious, forming only family parties, they're territorial and can be aggressive around their nests. (information from Pizzey's bird book)

Birds in Backyards have some information here.

Grey Butcherbirds are aggressive predators. They prey on small animals, including birds, lizards and insects, as well as some fruits and seeds. Uneaten food may be stored in the fork or a branch or impaled. Grey Butcherbirds sit on an open perch searching for prey which, once sighted, they pounce on. Most mobile prey is caught on the ground, though small birds and insects may be caught in flight. Feeding normally takes place alone, in pairs or in small family groups.

The Grey Butcherbird's nest is bowl-shaped, and is made of sticks and twigs, lined with grasses and other soft fibres. It is normally located within 10 m of the ground. The eggs are incubated by the female and the young birds are fed by both parents. The young birds will remain in the breeding territory for about a year, and help the parents raise the young of the following season.