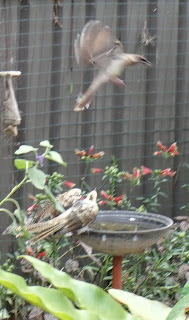 I have quite a 'birdy' backyard because I chuck out seed randomly and because we've got lots of trees around us, and I've got no pets. 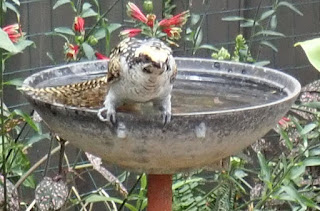 Between October and December, we have Koels and Channel-billed Cuckoos and Wattlebirds arrive with all the raucous squawks and squeals and yells associated with them. The mornings become quite deafening, and take some getting used to for me who likes my morning sleep in! 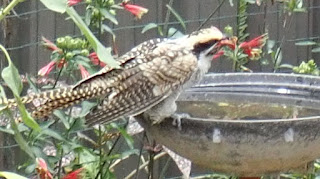 The male Koel is black with a red eye. In most birds, the males are beautiful and the females dowdy, but I don't think this is true of the Koels. The female and immature Koel are very similarly colours. The adult female has a red eye, and the immature Koels have a black eye. 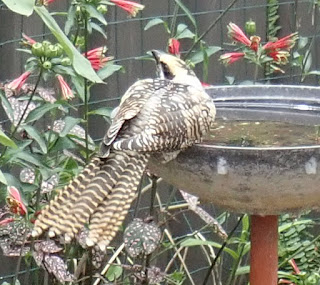 In the top left image, there are two Koels sitting on the waterbath and I can't decide if it's a Wattlebird or another Koel in blurry flight. In all the other shots, the Koel has a black eye, so an immature bird. I have seen the black male (but no photos this year), so I hope one of the two on the waterbath may have been the adult female.

I think this immature bird, and the female, are stunning. Those gold feathers on the head glistened beautifully in the sunshine. The banding is quite spectacular.

I'm so impressed that I was able to get these shots. I had to creep out, and I've cut away a lot of the image to show them up close, but the birds must be getting used to me, because I was probably within 7 m of him/her.

Have you ever seen such a pretty bird? 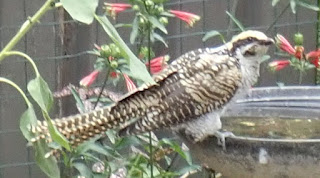