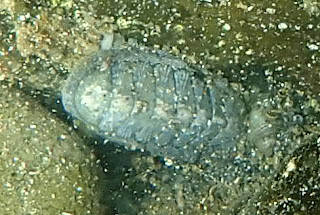 Hold on tight... I got an ID correct first go!

Yesterday, I was snorkelling in the local rockpool with my niece and nephew who are visiting. We were checking out some awesome things, including this 'underwater cockroach', and I said I thought it was a chiton.

Anyway, you know how bad my ID is, so I just wasn't sure.I worried about how on earth I'd dreamed up such a name, and why I'd just blurted it out to kids when I should have been teaching them the correct thing and not making something up.

But ahoy! I was correct! Blow me over with a feather.

So there's some information here on the Queensland Museum site if you're interested in more about chitons. 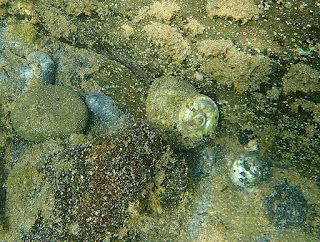 They're a mollusc (so an animal in a shell) and they like crevices and dark spots. You can see it here tucked in tight next to a rock, in a little crevice with a snail and some barnacles/top hat snails.

Their shell has 8 plates, held together by a girdle around the outside.

They eat algae and small invertebrates from rock platforms.