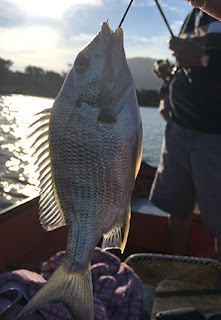 Following on from the last two Wednesday fishing posts (Flathead and Giant Toadfish), is today's catch from the same trip - a Silver Bream.

Before you get too excited, can I just say that I was a little creative with my photography with this fish. It's actually smaller than my hand, so it was nothing to be excited about! I just took the photo up close to give the impression of a much larger fish. If you don't know bream, you might be overly excited for my catch.

And what do you know...I call this fish the wrong name! In reality, it's a Yellowfin Bream. The trusty Australian Museum has corrected me again. You can find the bream webpage here for more information. Gosh, you'd think I'd know something I've been catching since I was a kid, wouldn't you!?!?! It seems not.

Anyway, let me tell you what I do know. These guys are fun to catch. Bream are kind of shy feeders. So they almost 'peck' at the bait. If you're holding the fishing line, it's like little grabs at it. But when they get hooked, these guys fight like billyo. You're pulling them in, and they're constantly swimming away, or trying to, fighting you with every molecule of their being. It's the size of my hand, or smaller, yet it's been the best fun pulling it in. It's not the pisss-zing of the line racing through your hands like when a big fish takes off. It's not the dead weight of an octopus or a crab. It's not the darting runs of a flathead. It's constant fighting against you, even though there's no way of the fish winning. As a kid, that was so reassuring. You could wrestle with this fish and feel a sense of accomplishment at not losing it in the struggle to land it. You might be able to tell that I've lost my fair share of fishes!

As an adult, I still enjoyed catching these guys. I enjoy that I can pop them back in the water, without contemplating anything else, and hopefully they'll live to see a long life. They grow up to 65 cm in length, so this baby has a way to go!

Do you have a favourite fish to catch while fishing?
Posted by Catherine at 12:00 AM