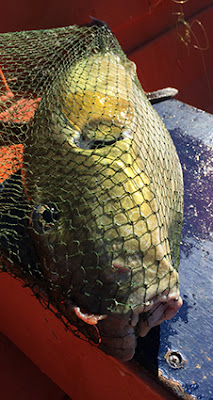 Dad visited last week and for the first time in a long time, we went out fishing on the river, in his tinny (that lives in my garage). Usually Dad brings the bad weather with him, but he must have tricked it this time because we had glorious sunshiny days. There was a bit of breeze both days we went out, but only for part of the day.

We had some good fishing too, or I did! The first day, I had 3 and Dad had enjoyed netting them for me! Luckily, the second day saw him get into the action too.

We didn't keep any of them. We could have kept the flathead but the first day I caught one early, and we let it go when we moved spots, thinking we wouldn't catch another. Then I caught another! The second day, we had two but we were late leaving to pick up Mr E and we didn't think we'd have time to clean the fish, so we let them go.

My other catches weren't ones we'd keep! But more on those fish, and the flathead, in the coming weeks.

This week is about the Giant Toadfish that I caught. It was a weird catch because it was heavy but a lazy kicker as I was pulling it in. I was thinking maybe an octopus, but when it kicked, it felt like a fish swimming not an octopus dragging. So I'm pulling up the mystery and Dad's there with the net. He scoops it up, struggles to lift it into the boat, and then we look at it. It's not pretty.

"What on earth is it?" I ask Dad, because he always knows. 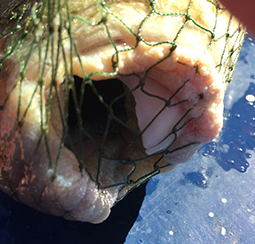 So we stare at it. I pull out my phone and take snaps, and then the mouth opens and my camera is snapping at this tooth, this huge tooth! And the fish is making these noises, like it's moaning/gulping. It's body is shuddering. And we have a hook in its mouth and its mouth has that giant tooth. So we used pliers and unattached hook from fish, that's still moaning and shuddering. It's kind of eerie and disconcerting, especially when this fish looks like some sort of mutant.

Dad thinks we should keep it. I'm horrified. What on earth would we do with this fish? It doesn't even have a well-defined head to cut off for cleaning. Once I point this out, the fish goes back to the sea, leaving slime all over the net. So unpleasant!

Dad thinks he's caught a smaller thing on the Gold Coast but he has no idea what they're called. We're thinking parrot fish, or leatherjacket, or porcupine fish, or crazy toadfish. I'm doing random Googles while fishing but I give up. I know how long my ID takes.

When I get home, I tweet the pic to the guys at Wollongong Uni (Fish Thinkers) hoping they'll know, and another guy who's local and a diver answers and tells me it's a Giant Toadfish and they are unusual down this way. Looks like the fish did a Nemo in the current!

So, here's the stats. We reckon it was about 70cm long, weighing about 3 kg. We were in about 12 ft water and I used a beach worm for bait. We were about 75m out off the Hay St boat ramp, the one in the middle of the road, not the end.

And that was Dad and my weird fish for the week!