The last few weeks I've been talking about fish, after a fishing day with Dad. Today we're looking at the Tailor. The Australian Museum even calls it by the same name I do - bonus! You can find info here.

Since I was a kid, the Tailor has always earned my respect. It's a clever little bugger, with a mouthful of razor-sharp teeth that it uses incredibly well. If you're losing fishing tackle, you can bet you've got tailor around. And the Museum website says this is how they earned their name - their ability to cut fishing nets. It says they can grow to 1.2 m in length - but we've only ever caught small ones. This one is about 15 cm or so.

Dad and I were losing gear. I lost hook, swivel and sinker pulling in a fish, There one minute, gone the next. I was ashamed to have lost the fish, and it brought back awful childhood memories of losing many many fish for not pulling them in correctly, or whatever other silly thing I did. But I thought I was doing this okay. Anyway, I rerigged my line. 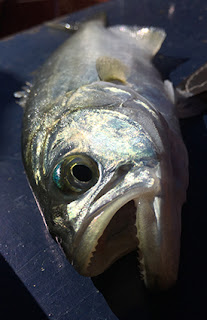 Dad had a baitless hook in the water while he sorted out a tangle (I know I shouldn't gloat about this, but I was so damn glad he had the tangle and not me, I was almost grinning from ear to ear as he detangled! As kids, my sisters and I had so many tangles and he got so frustrated at us. But having taken my niece and nephew fishing recently, I do understand why he was frustrated, I just didn't when I was the source of that frustration!). Anyway, when he pulled in his line, there was nothing at the end of it.

Over the day, I think we lost 3 or 4 hooks, a couple of swivels and sinkers to phantom attacks, plus a couple when pulling in lines. And Dad happened to catch one of the culprits. Again, I played with the photo to get the mean looking teeth shot, but the fish is quite elegant and attractive. It gives a good darting fight. And they taste great, but we didn't eat this one. I used to eat them as a kid. They have lots of bones but are sweet, well, that's what I remember anyway! Phew. My memory isn't wrong. The Get Fishing website says they're great eating fresh, but if you freeze them, they go soggy. I would have eaten them fresh on holidays after catching them.

Do you have a favourite fish for eating?