I'm usually pretty quick on picking up smutty jokes, sexual innuendo and the like...but when I'm with kids, my mind seems to become clean and these things pass me by (that's my excuse anyway!)

So, following on from the snake and the zoo visit, we're in a mixed animal talk by a zoo keeper. He brought out 4 animals and gave a little talk about what was interesting about each and let everyone pat/touch/smell the critter. There was a koala (they have the most incredibly beautiful smell, like eucalypts and passionfruit), a ringtail possum, a crocodile and a snake.

Squeeze the Burmese Python is the snake. He was rather small!!! And we got to touch him, watch his muscles ripple as he was held upright, we saw his two 'legs' and his anus, we heard about his girlfriend and their planned new enclosure.

During the chat, the keeper told us how friendly Squeeze was because he'd been handled daily since birth. He never associates handling with feeding or stress, so he's just relaxed and enjoys the attention from people. This was really important for a snake used in these talks, obviously! 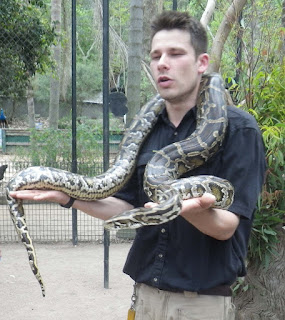 Then he showed us how cool Squeeze was by kissing the snake a dozen times with big smacking kisses on the snake's head.

Then he says, "I don't do this with my snake at home because he's nowhere near as relaxed as Squeeze."

My sister...almost choking with laughter.

Some hours pass while we're at the zoo and then as we're leaving, the same guy is doing the talk again and tells us he has a different animal for this talk - a sugar glider - so we go again. There's only us and another family who have seen the talk before too but are keen to be there again.

The sugar glider is the softest, tiniest thing. Then we get to Squeeze again. The kisses happen and my sister is again choking, me thinking up questions. After the talk, I asked him how he could tell that one snake would appreciate his kisses and another wouldn't. A legitimate question I thought...but my sister is snorting now.

I kiss animals, usually the furry kind, and I know how you can tell if a dog would appreciate a kiss or if it wouldn't. Same with a cat or a horse. A snake...I've never thought of kissing it (can you hear my sister snorting more!?)

He explains that you can feel how relaxed the snake is by the tension in the muscles. As you bring the snake close to your face, you know if it's happy or not by how stiff it's become (yep, my sister's almost rolling on the ground by now; me, still fascinated that a python has body language you can read). So I ply the poor guy with more questions, get onto the Diamond Python thing from Wednesday, and then off we go.

I'm ecstatic that I have new knowledge. My sister is snorting, still. Out of earshot of her 4 year old, she says, "His snake at home gets all stiff and he can't kiss it." She's hardly able to get the words out around her laughter...and suddenly the innuendo sinks in.