Sometimes good things come when I'm AWOL and not smutty - like realising I didn't do a pony fetish in my fetish blogs. So today I'll rectify that!

This is called 'ponyplay' and it's exactly as it sounds - a person 'becomes' a pony and is treated as such. They can be ridden, they can draw a cart/buggy, parade in full costume, or graze and act with other ponies.

The 'costumes' are many and varied but usually include some form of bit and bridle, reins/harness, and a butt plug with a pony tail. There can also be hobbles, pony boots, corsets or other body items to depict harnesses or something similar.

There's a classic erotic book, I just have no idea which it is, that had a Pony scene in it that just blew my mind. I wish I could remember where I read it but a quick Google search hasn't helped me. I was thinking it may have been The Adventures of Fanny Hill or The Story of O, but it may have been in one of the Marquis deSade's books. Anyway...in my memory of this scene...the female submissive is taken to the pony day at some rich person's establishment where there are stables...but for the human-horses, paddocks...for human-horses, complete with water troughs and buckets of feed. There are racing tracks, trotting tracks, parks for parading, etc., all designed for human-horses but exactly mimicking that used for animals. 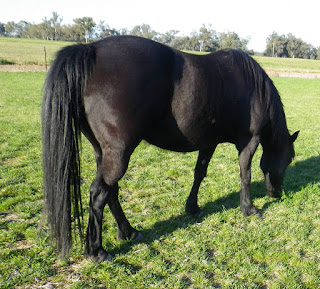 The pony tails are of varying lengths and thickness and this is explained to her. A 'new' horse can only hold so much weight in the tail coming from the butt plug, so the 'new' horses have thinner, shorter tails. A very experienced pony has a thick heavy tail which they wear with pride. It's one of those things that my mind may have made much more prominent than the scene had it because it blew my mind when I read it. Something so obvious...when you think about it!

I guess ponyplay links in with extreme D/s we discussed here, the animal fetishes we looked at here and role play, here.
And in case you need a reminder of what ponies and pony tails look like, here are two of the cutest ponies! I was looking after them the last few weeks. It's been 7 years since I had a horse to care for and I forgot how much I loved it...and them. I loved their gentleness, the scent of dust, hay and horse, their big thick tails and manes, their soft eyes and nose, the snuffle of warm horse breath on your face and neck. 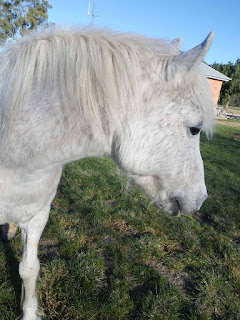 Yes, I know, I have a pony fetish...but mine's the "teenage girl who's horse mad" fetish, not the dress-up one!

I don't think I've grown out of that love of horses. And I made an interesting observation too - my love of horses is an on-the-ground one more than a riding one. I love working around them, brushing them, being with them. My friend prefers to be riding and she gets nervous on the ground. Me...I'm nervous once I'm off the ground and on them. We'd make a good team. She could be the champion rider and I'd be the strapper... and somehow it still sounds like a strange sexual thing, doesn't it? I came home and found my smutty mind - I must have left it behind :)