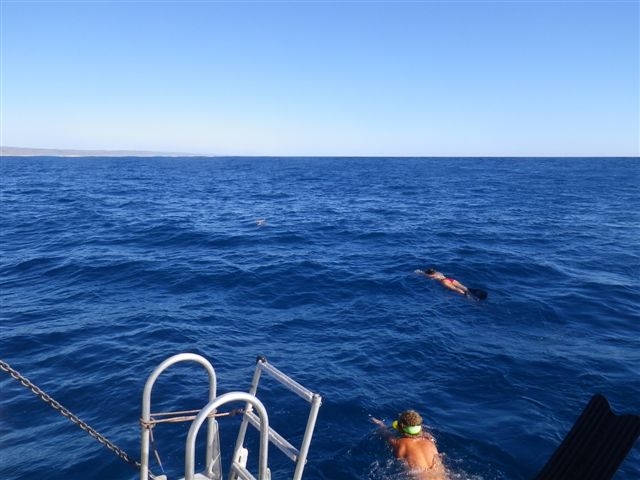 On our trip to Exmouth, Western Australia, we went out on a trip to see whale sharks (which we didn't see) but one of the things we did see was a sea snake.

These photos really don't do it justice. The sea snake was maybe 8 foot long, and round enough that it spilled out of a guy's hand when he went to pick it up. It's a seriously large snake. I thought sea snakes were small - the ones I've seen have been - but this would have rivalled any diamond python lazing around eating rats from your roof!

Sea snakes feed on fish, darting out to catch them with open mouths. They swallow fish whole, similarly to how land snakes feed.

Sea snakes have highly toxic venom but are not terribly aggressive, and have short fangs (~1.5mm) so they are unlikely to deliver a large dose of venom to a human.

They have a paddle-shaped tail to aid with swimming. Sea snakes often bask in the sunlight on the surface, which is what this snake was doing. They usually remain underwater for 20-30 mins, but can remain at depth for a few hours.

Fertilised eggs are retained inside the mothers' oviduct until they are fully developed. .The young are born alive at sea and are independent from birth (except for one species).

Okay, now I've been looking up info, it says they get to 1m in length.... but I'm sure this snake was much longer than 1m!! Although, maybe I'm deluded.
Posted by Catherine at 12:00 AM