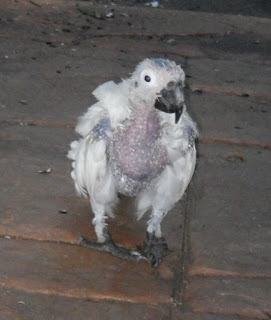 We have a naked cockatoo visiting is at the moment. My husband has been "looking after" him over the weekend making sure he has sufficient food and water. I took this photo and then went looking to see what could be wrong with him

PBFD is Psittacine Beak Feather Disease and pretty much looks like this - although it usually has beak deformation too and he doesn't seem to show that, so I'm not 100% sure.

However, if it's PBFD, it's highly contagious amongst parrots and we could end up with any bird visiting us catching this disease.

So the bird feeding will have to stop. I couldn't stand 100s of naked birds in winter.

It's suggested that you catch and euthanise the bird. No way I can get near to this fellow. He may be ill, freezing, and hungry... but he's still a wild bird (with a humongous beak).

Speaking of humongous beaks, I used to be in a Wildlife Rescue group and one day was sent to rescue a cockatoo. They'd shoved him in a budgie cage where he didn't fit too well. Anyway, armed with towel and gloves, I went to retrieve this, by now nasty, cockatoo. A young kid was there watching with his dad. So I get the bird from the bottom of the cage, then before I can put him into my larger cage for transport, he hooks that humongous, hurty beak into that soft tissue on my thumb right at the side of the nail. Young child present, representing my wildlife group, well I grit my teeth and swore a LOT inside my head. I got the bird in the cage but would he let go of my thumb? Not on your life! Then the father says, "Oh, the poor bird, what have you done, there's blood dropping on the cage." Between gritted teeth I smiled and said, "It's not the bird." You know, it took that man a long time to work out I was the one bleeding! The poor bird!! It lived... but I was never a fan!