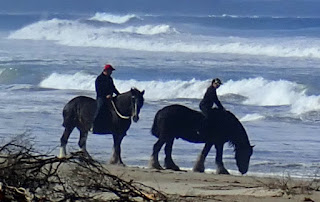 Last week I headed to the beach for some quiet time - after conference, it takes lots of silence and space to recharge me :)

I was perched on the small dunes, in the sun, watching the waves roll in, when a couple of horses arrived on my left. The people were bareback and the horses just wandering along. Then they went into the water. The smaller horse, with the smaller rider, wasn't so happy about this surf business and began snorting and pulling his head down. Next thing, rider was dumped in the surf (photo was blurry, darn it!). They were a fair way from me, and the other person didn't seem concerned, and then horse roamed up the beach...the poor rider lost the reins but managed to grab some tail. I couldn't resist the shot.

Then I realised that I was sitting taking photos, when this poor person was wet, and the water was cold, I know because I'd already paddled and got my track pants wet! I've no idea how that always happens to me even when I roll them up - like a hobo! So I figured the rider woudl probably need a leg up and since I was the only other person within cooee, I thought I'd better roam over and see if I could lend a hand.

As I got closer, I started to see how big these horses actually were. BIG! I was thinking Clydesdale, but when I spoke to them (the riders that is), they told me Shire horses. The mare was 18 hands high - towering above my head. The stallion who'd not liked the surf was only 17 hands. I don;t think I could have legged the lady up, so just as well she said she'd give the horses a swim now she was wet anyway! 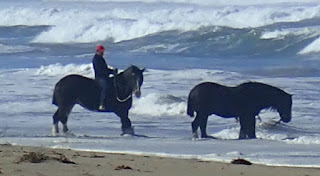 Shire horses are English draught horses, originally used for knights to carry all that armour. It's often been used as a war horse, and almost became extinct after WWII. Now it's bred for many uses - ridden, led, carriage work - and people love their gentle temperaments.

There's a Shire Horse Society in Australia here, with more information if you're keen.

I felt like I'd met royalty and history. But I was also worried about my bare feet as I stood beside these massive beasts. I need not have worried, both horses were on their best behaviour :) I do wish I'd thought to take a photo when I was up close. They were so very impressive.