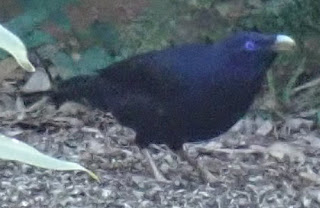 I know I shouldn't still be ridiculously excited about having Bower birds in my yard...but I am!

This morning, the male came and drank at one of the water bowls in my yard, while I was nearby. OMG. I was grinning so hugely. I didn't have my camera, but the colour of his feathers - that impossibly glossy blue-black - is forever embedded in my memory.

This arvo I tossed some seed out to see if I could lure him when I had my camera, and I did! I didn't get very close, so not great shots, but he's getting more used to me now...and that's so exciting! 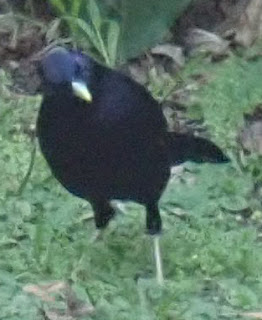 And a week later, I looked out my window when I heard the now-familiar chattering calls, and to my shock, I found two females and while I was snapping, the male came too.

These shots aren't great because it's through the window and it's not clean!

I might embarrass myself by saying this, but I stood at that window snapping as the females skittered and fluttered around each other, calling as if they were chatting to each other. It was quite a dance and I just kept snapping, completely amused by the pair.

When the male came, I almost fell through the glass trying to get a shot of all three together. Luckily they aren't as skittish now, so the bang of the camera on the glass didn't scare them off! 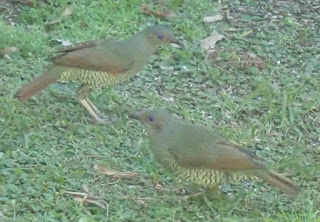 I downloaded the photos (gawd, how can you take 100 photos of birds, within a few minutes, through a blooming window!?!?!) and as I scrolled through them, I saw something I hadn't seen while snapping - the females were courting dancing. The two females!? I dug out my Pizzey, and it said that it takes up to 7 years for the males to develop the satin-blue feathers of an adult male. For the first 4 years, the males look like the females. 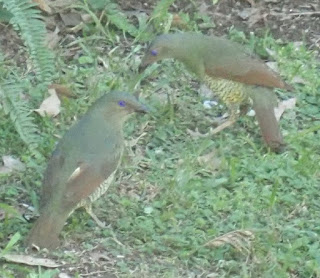 I'm learning more...and I'm loving my backyard. (And yes, writing stops, and all other work too, while I hang out the window watching fake courtship displays!)

What's keeping you amused this spring (or autumn if you're in the northern hemisphere)? 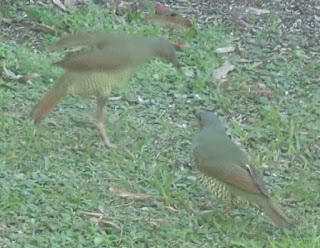 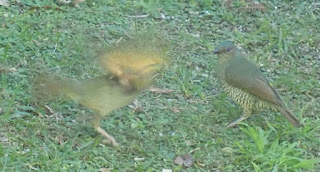