I've been a collector of rocks, shells, soil, bugs and odd stuff for as long as I can remember. I suppose it began with shell collecting, which Mum did whenever we went to the beach, and developed. I distinctly remember her parents bringing me rock samples back from Mt Isa when they'd holidayed up there, and I would have been under 10 years old when that happened. These are probably my oldest rock samples in my collection.

I've always collected interesting rocks. But a few years ago, I found a stunning piece of gypsum (I think) in a dry creek bed in central Qld. I think it's one of my favourite pieces. I've bought bits too. When I was in 5th Form, 17 years old, we went up to Yeppoon on holidays and I bought a "thunder egg". I've also bought a piece of amethyst.

I've always wanted to own rocks as jewellery. In my teens, there was a crazy for those coral necklaces (pink mostly) but I wanted a brown one made of rocks. They didn't exist, but Mum found one some years later and bought it for me. Then I've bought small opals and black pearls when travelling around Australia.

Over the years, I've also collected small gemstones as I've seen them and 'felt' that I needed them. And then I've found some rock bowls, and some wooden bowls, and I've a few of those too.

Lately there's been more gemstone jewellery available (I don't know if I've just found it, or the internet has opened up this interest market). I seem to be collecting more and more gemstones.

And now there's this whole industry of using gemstones to 'help' with life. It's really quite phenomenal. When I look at my collection, I'm rather attracted to the colours black, white and light blue. 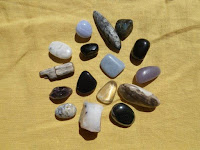 And technically, black and white aren't true colours but reflection/adsorption of all colours.

Now, I own more colours and I like picking them up to help me think. Sometimes I'll pick up a particular stone and carry/wear it for the day to help me with whatever I need to do. I don't really know what the gemstones mean, if I have to know I need to look it up. But I don't need to know what someone tells me they mean, I just let my intuition pick what I need...it's been working for me for many years now, so no point changing a good thing!

Are you into rocks or stones?