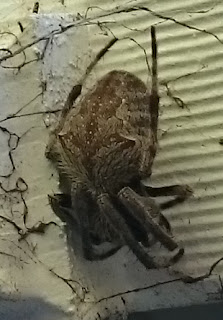 I have this really huge, ugly spider on my verandah at the moment. I've been taking pictures, then Mr E told me I had to find out what he was because he was so ugly it even had him intrigued (and taking photos - he took this one of the spider).

So, the trusty Australian Museum site came through for me again. This fellow is the Garden Orb Spider, you can find out more here.

These guys are only seen mid to late summer and make huge webs (which I photographed with glorious rain droplets in it yesterday). The spider hides up on the posts, all tucked up, through the day. But at night, he's big and beautiful (?) in his huge web, just as the museum site says.

Hmm, I think it's also called the Garden Orb Weaving Spider, because the same photo is used on that site too (here). Here's some life cycle info from the webpage -

"The lifespan of a female Garden Orb Weaver is about twelve months. A female lays her eggs in late summer to autumn. The eggs are encased in a fluffy silken cocoon and attached to foliage. During autumn, the spiderlings hatch and disperse by ballooning (floating on the breeze using small silk strands as "balloons"), and build their own tiny orb webs among vegetation and wait out the winter. During spring the spiderlings start to develop more quickly and they mature in summer.  The cycle then begins again, the adult females mate and lay their eggs.  Adult females usually die off in autumn - early winter. Males and females are similar in size."

I'll have to keep an eye out for the eggs and the spiderlings. 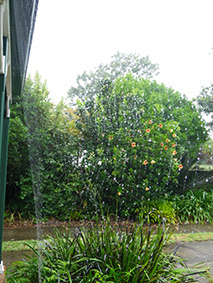