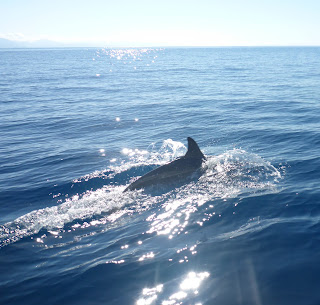 There's something magical about dolphins. When we were in Cairns, I booked on a sailing vessel out to Green Island but no wind meant it was motored, but no matter. I was looking for a small group and that's what I got.

Coming home, we came across a pod of dolphins. And when I say came across, the Captain stopped the boat and waited for the dolphins to come and play.

The crew leaned over and called and yeehaaed and explained that these dolphins knew them and enjoyed riding the bow waves. I knew dolphins enjoyed riding bow waves...but I didn't know they came when called. These ones did (sort of like Flipper of you're that old!). 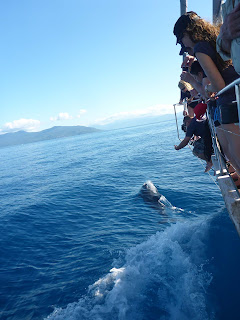 We were towing a dinghy out the back, and while everyone crowded around the front of the boat and oohed and ahhed over the amazing animals, out the back, quietly cruising on the bow wave of the dinghy were a couple more dolphins completely out of the limelight.

The ones who worked the crowd, worked hard. The rode the waves, drifted out for photos, came back in. They hung around for maybe 20 minutes. And not a soul on that boat wasn't captivated. You can see in the second picture that everyone is there, right on the edge, jammed up tight, just to watch these animals.

Earlier in the day three white tip reef sharks circled the boat and I was pretty much the only person taking photos and being amazed by them. A dolphin and a shark don't look that different to make everyone love one and hate/fear the other. It's an interesting observation I made that day. It made me feel a bit sorry for the poor old shark.