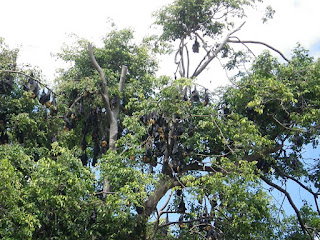 Earlier this year when we were in Cairns there was this tree decorated with fruit bats. I had to go and stand under it and sniff.

Years ago, I raised two fruit bats in 2 different seasons. Their scent is something that I love. It's part fermented fruit, part musty, part sweet. It's like the scent of horse in that you can never really describe it.

So, standing under that tree with hundreds of bats above me, I reflected on my baby bats. This is one of them testing her wings (photo). 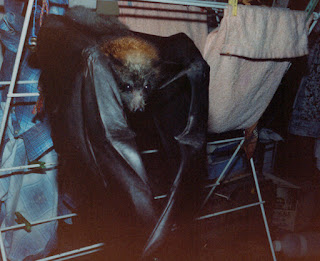 They arrived small enough to fit snugly in the palm of my hand. They needed a 'dummy' (a specially made bat teat that fitted to a small dropper bottle top) because when they're with their mothers, they're permanently attached to the mother's nipple and held there on her chest. They needed to be wrapped snugly in a man's handkerchief (like swaddling a baby) because the mother would hang for most of the day, upside down with her wings wrapped around her bub.

Fruit bats are highly intelligent. They were by far the most intelligent (and affectionate) animal I've ever raised. They scratch - a lot - but that's just because they have only claws for movement (aside from wings). Their feet have claws. On their wing is a "thumb" with a hook on it which they use for hanging head up (for toileting) and movement.

Now, fruit bats are associated with animal-to-human viruses and I don't go near them. But for those years I did, they were absolutely gorgeous.

ABC presenter, Richard Morecroft wrote a book about his fruit bat (flying fox) raising experience - Raising Archie. While he raised Archie, he often read the news with the bat swaddled in a hanky and snuggled against his chest, under his shirt :)

Posted by Catherine at 2:36 PM