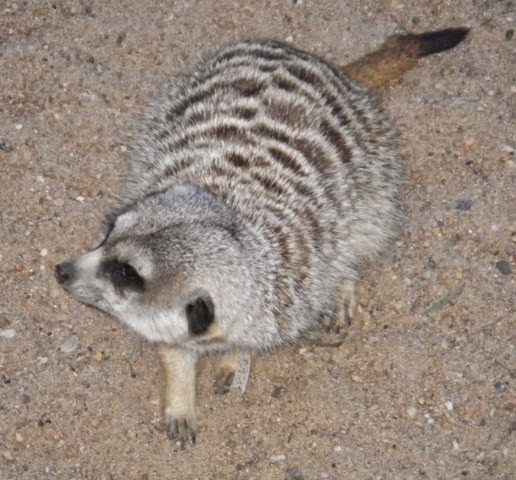 Meerkats have become everyone's favourite since that TV show, Meerkat Manor, gave them a household name. There are heaps of meerkat videos on youtube and other sites. They seem to have a cult following!

At the Western Plains Zoo recently, we had an out-of-hours tour where one stop was the Meerkats. I was fascinated to learn some of the more obscure things about them.

In a pack, there is a dominant female, and usually she is the breeding female but other females can also breed (it seems entirely dependent on the nature of the dominant female). Gestation is for 77 days and 2-5 pups are born.

There may be more than one sentry at sometimes, but there is always one. Although, the keepers at the zoo said on rare occasions, they 'tribe' get so excited by food they may rush down to eat and then realise there is no sentry and one of the meerkats will scramble quickly into place. The keeper wasn't sure how the sentries were decided or if there was retribution for failure :)

Meerkats have a great sense of sight. At Dubbo Zoo, the sentry will call for birds flying past...but also for planes and some of those are quite high up and difficult to see.

As my memory is not the best, I checked most of the information here.
Posted by Catherine at 12:00 AM