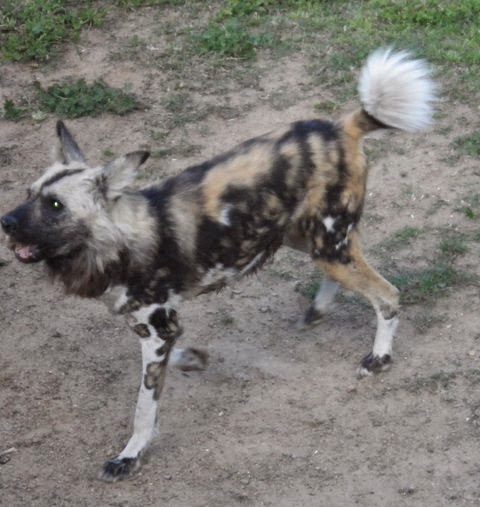 The African Wild Dogs aren't my favourite zoo animal but I learned some things that made me respect them more than I have.

They work together, with a female leader, and they're all about endurance. They don't drag and kill, but run an animal to exhaustion before killing and feeding. They do this as a pack, with groups of members taking turns at the chase. How nifty is that?

Each dog has individual markings, even if they all look speckled to me :) The dominant female is the breeder of the group, and she chooses who she mates with. Pups are cared for by all, and adults will let the pups feed first on a kill, and will also regurgitate food for pups who remain in the den.

They have a dominance structure re feeding, where the weakest may miss out. At the zoo, they feed strategically so that on some days the pack feeds as a pack where the strongest get most/all of the feed. On a couple of days a week, food is thrown to individuals to ensure everyone receives some food. Kind of a nifty way to keep the pack alive!

When we slept over at the zoo, I'm sure I heard these guys howling in the night. They were kind of cool to hear, I went back to sleep smiling!
Posted by Catherine at 12:00 AM