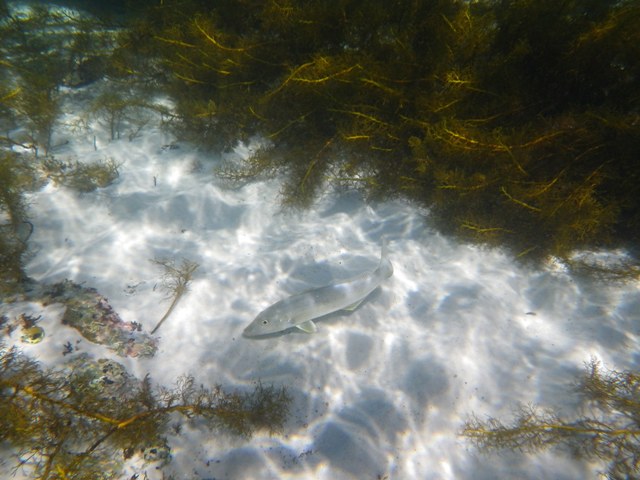 A few weeks back, you can read it here, Lily and I had a whiting sex discussion - as you do - and I started to think about making fish sex sexy... here's my first attempt :)

You'll be pleased to know it's back to normal Wildlife next week :) :)

I heard their cries but I was hungry. Mum has me on this ridiculous diet so I can attract boys, but I'm starving. The dangling prawn looked juicy, so I leapt at it, swallowing it in one huge gulp. And then I felt the jab. The side of my gills throbbed. Before I knew what was happening I was being dragged upwards. I fought hard, tail thrashing against the water but it was no use, the upwards drag continued.

The screams below were horrifying. My so-called friends had been watching me starve for weeks but hadn't helped me out by sneaking me any food, and now they screamed. Now, when I'd thrown my life away for a tasty morsel. Damn it. Maybe Dad was right and Willful Willia was my rightful name.

Just as the vision of my friends was vanishing, just as the fight in me was leaving, Wilbur swam up from the bottom. Wilbur had shared his seaweed with me. "Wilbur," I screamed with every breath left in me. "I love you." I fought the drag upwards, fought to get back to Wilbur, but with no success. I lost sight of him.

The water grew lighter, in colour and heaviness. I kept fighting even though I knew it was hopeless. And then I broke the surface. I'd never broken the surface before. Ever. A blinding light and a heat hit me first, and then a sense of suffocation. I was a goner. I'd end up on a frypan. Like all the stupid fish in the stories Dad had told me in my youth.

I flew from the water, droplets falling from me as warmth breezed over my scales. I was afraid to try to breathe. What happens if a fish breathes out of water? Do I turn from a fish to something else? Do I die of toxic gases? Does the water in my gills evaporate and I die as if in a frypan?

Instead of scales this animal had something pinky-white covering him in places and then some different material covering the majority of his body - a loose flapping thing. Maybe like flattened seaweed decoration but it was the largest piece of seaweed I've ever seen. More terrifying were the spines that covered the area around his mouth. Grey, white and black spines, encircling his mouth. What on earth would they do? Would they stun an animal into submission before he ate them? Me? Or were they decorative spines? Or something else entirely?

Before I could study him any closer, the pain in my gills throbbed sharply and then was gone. The second of relief was not enough time for me to relax, or rejoice or even say 'thank you' because then he brought me towards these spines. From between the spines lips pouted at me. Big pink rubbery lips, like a big wrasse. I could only stare and await my doom.

The lips touched me. Hot air almost fried my gills. The animal's taste was dreadful. And before I could process anything else, I was flying through the air and dropping into the sea.

I gulped a breath and another and then I scurried for the bottom as fast as my tail could move me. I aimed for a clump of weed on the edge of the school grounds. Camouflage. Somewhere to cry my tears of joy, and reproach myself for my hunger.

I dove into the seaweed and hit against another fish. "Sorry, sorry." I tried to back out but I was so stunned by all that had happened I could hardly move.

"Wilbur?" The relief at seeing him was all-encompassing. I threw myself at him, rubbing my body against his, scraping my fin against his side, blowing bubbles along his tail shaft. And then I moved in front of him, lined up our lips and moved in like the strange animal on the surface had. I let my lips brush against Wilbur's. At first there was nothing. Within a micro-second a tingle began in my lips. I pressed a little harder against Wilbur's mouth. Hips lips moved. The tingle turned to a deep throbbing. His lips were salty, soft and hard in all the right places, and his breath smelled fishy and perfect. Not dead and awful like the surface animal. My lips brushed against his, then toured his face, feeling each part of him with a super sensitive part of me I had never known could explore others.

"Willia, where did you learn that?"

"The surface animal did it before he threw me back in the water. Except it wasn't pleasant with him, not like it is with you."

"You went to the surface?"

Wilbur gave me a look of confusion and maybe a touch of exasperation. For a second I thought he didn't want me, and then he said, "I don't want you skinny. I want you just the way you are - curious, adventurous and everything."

I'd never loved Wilbur as much as I did in that moment. I know it's not the done thing for a girl to ask a boy, but it was time, and if I waited for Wilbur we may not ever do it. "Wilbur, would you come and spawn with me?"

Wilbur's mouth dropped open. Bubbles rose from his gills as if he was spluttering. Maybe the shock of me asking was too much. Maybe I should have stayed quiet.

"I'm dying to spawn with you." His fin brushed against mine and we swam to the deepest channel to spawn. We found a secluded nook and we tried our fish kissing again. This time Wilbur kissed me all over. He even slipped his lip beneath a scale and blew against my skin. It was heavenly. His lips brushed against the finest part of my fins, nuzzles where my fin joins my body which caused a crazy rush of water to flood through my gills, soaking me in oxygen, making my head light and fuzzy. When he brushed his body over mine, so his scales rubbed against mine, his fins brushed over mine and our tails flicked together, I had never felt such connectedness. The world was wonderful. Wilbur loved me and was making love to me. His lips brushed the top of my eye as his body slid forwards. Then he swam in front of me and kissed me, lips to lips.

My body swelled with the feelings he brought out in me. Everything seemed to be swollen, shaking with pleasure, bubbling, waiting for release. And then it happened. Eggs rained from me as the bliss of his lips and the gentle current rode me. Dozens and dozens of eggs fell to the ocean floor cushioned on the current and deposited on the soft white sand. Seeing what he did to me made my heart swell. I could never explain to him how this felt. I was glad I hadn't gone into a frypan without feeling this pure joy.

When the eggs finished spilling, I kissed Wilbur's body. Nibbling against his lips. Flicking at scales with my lip. Blowing bubbles against him until he writhed in the same joy I had. Then I kissed beneath his tail shaft, rubbing against the strongest muscle in his body until a spray of sperm emitted from him. As he deposited sperm all over my eggs, I thought I'd die of the happiness. It was the most incredible sight to see our lives interwoven like that.

"Our children," I whispered in awe at our clutch of creation.

"And they'll be as beautiful and feisty as you." Wilbur took my side and together we left our children to form.