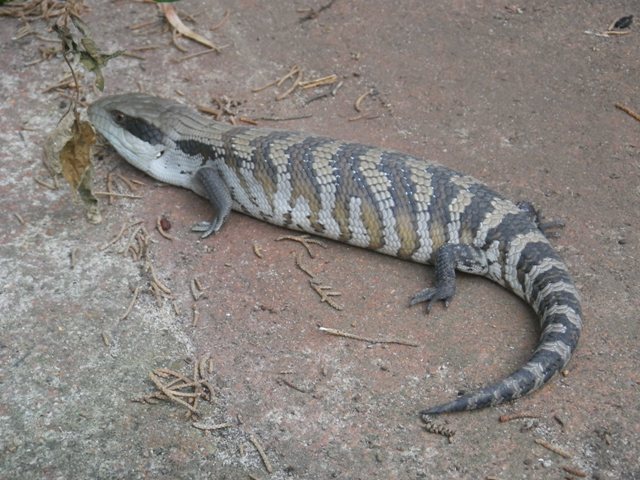 This Blue-tongue lizard has made himself a home in my backyard since my dogs have gone to the big paddock in the sky. I think he's been under the house ever since we came here... but has only taken over the whole territory recently. (One of my dogs had a fondness for lizards.)

I'm fond of lizards but after living in the country for so long, when they appear under my feet, my body immediately freezes and the word "snake" comes to my head, then I remember where I am.

My husband has grown fond of this guy so much so he was looking for him the other morning - and found him under his foot! Lordy! He assures me he didn't put all his weight on him and that he felt the lump under his thong... but I haven't seen the blue-tongue since, so I'm worried.

The Australian Museum site tells me that the Blue tongue is the largest of the Skink family. The Eastern Blue-tongue is silvery-grey with broad dark brown or blackish bands across the back and tail. Individuals on the coast usually have a black stripe between the eye and the ear which may extend along the side of the neck. The Eastern Blue-tongue can grow to almost 600 mm in total length, of which about 360 mm is head and body.

Blue-tongues eat a wide variety of both plants and animals. Blue-tongues are not very agile and the animals they eat are mostly slow-moving. Their teeth are large and they have strong jaw muscles so they can crush snail shells and beetles.

Blue-tongues live alone for most of the year, but between September and November males pursue females and mating occurs. At this time, males may fight aggressively among themselves. Mating may be rough, with females carrying scrape marks from the male's teeth.
Posted by Catherine at 12:00 AM