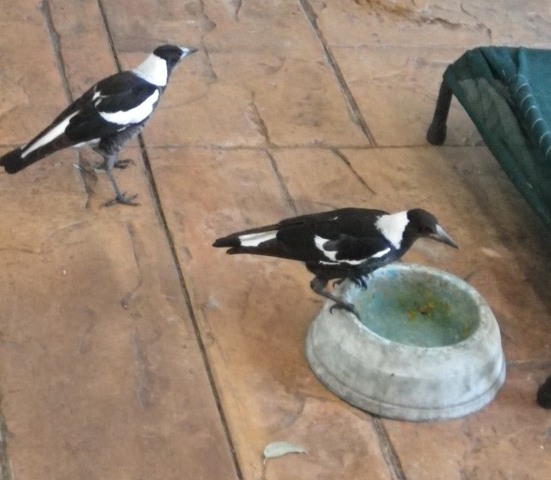 I have a gorgeous family of magpies come and visit us. When the youngsters were just out of their nests, their folks dropped them into our yard for a visit. The dogs' bowls became a great food source (and much easier than pulling worms out of the ground!) and the birds kept coming back. They also spent some time in the garden and the lawn getting real bird food.

They became so friendly, they'd sit at the back door and warble until I came out to give them something extra - like some sunflower seeds. Sometimes I'd break up the dog biscuits to smaller crumbs for them. There's something about that warble that melts me. It's special. And when they're singing it just for you, it's an incredible feeling. Sends goosebumps racing along my spine.

My dogs didn't mind sharing their remains with the maggies. In the photo, one dog is just behind the birds and the other just in front - sleeping!

I've always been a fan of the magpie warble and I've always had magpies near me wherever I've lived. I know they have a terrible reputation for swooping during the nesting season when they're protecting their young, but I think I've only been swooped once that was scary. Mostly when they know you (because you're in their area all the time) they don't worry you.

Are you a fan of magpies? Or do you have a swooping story?
Posted by Catherine at 12:00 AM