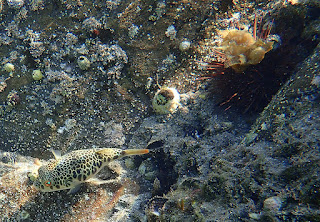 I'm not a great fan of winter because, although the water isn't freezing, the air is cold and it makes swimming uncomfortable...unless you have a wet suit and then you can manage it the swim and getting changed - under a warm shower!

In teh bottom left of the photo is a toado (as I call them) which are properly called a Common Toadfish, but they're also called a Weeping Toadfish according to the Australian Museum Website (you can find it here).

A weeping toadfish because of the marks beneath their eyes...which I have to say I've never noticed. Not when snorkelling, or when fishing and catching these pesky things! I must have a better look next time.

I call these pesky because we always caught them when we were fishing as kids. They put up a pretty reasonable fight, so you'd think you had something good...but a toado. It was so disheartening. At least they're easy to get off the hook, even with their prickly skin. My sister changed our view on them when she caught one on an empty hook - that was pretty fun. I'm pretty sure she also caught one on bubble gum, although maybe that was another kid. Anyway, these guys are a fishing kid's joy/pain!

They have a great coloured camouflage system too, like sharks, where the top of them blends well into the ocean background (sand, rock, weed) when you're looking down on them. If you're looking up, you see their pale underneath, which makes them tricky to spot. Really clever.

And as it warms up here, I'm a bit keen to get into the water again. I have had a couple of quick ocean dips this winter, but I haven;t snorkelled since May/June when I thought it wouldn't be so cold and yet I was chilled to the bone!

Are you a fan of winter? How about toados?
Posted by Catherine at 11:37 AM