Long-nosed Fur Seals (previously known as New Zealand Fur Seals) hang out around Kangaroo Island, which is one of the reasons that calling mobile animals by names that reference a country is all sorts of confusing. It's nice now that there's a push to use the Long-nosed name - and people on KI were quite strict about distinguishing which type of 'seal' you meant when you used that generic name. 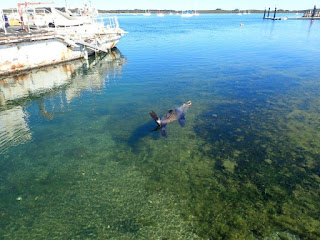 These guys aren't the friendly, puppy-like ones. As the dolphin guy told me, these ones might look fun and interact a bit, and then they'll bite you for no reason. He also said these are the ones most closely associated with sharks. He reckoned if you saw a Great White around KI, you were most likely with the fur seals. And this information was good for me, because I'd been tempted to jump in and have a swim with the first seal we'd seen (the day before the dolphins), but there were other people around and I didn't. So that was a bit lucky - I may have been sporting a bite and that would have ruined the whole trip!

At the end of KI, there's Flinders Chase National Park, and the SE corner has Admiral's Arch and Remarkable Rocks. There's a colony of Fur Seals around Admiral's Arch, which is surrounded by rock platforms. So the fur seals do their feeding and then come to these rock platforms for a rest (except for the anti-social one we saw at the opposite end of the island!) 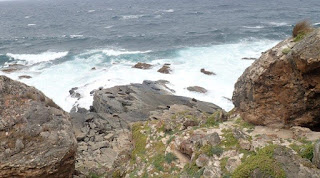 There are mothers and babies, teenagers and bulls on the rock platforms. You could stand there for ages watching them. Some sleep, but there are others who are just trouble. They go around waking up and stirring up trouble. Some play in the waves or the gutters in the rocks. Others climb up and down the rocks looking for a better spot to lie. It was fascinating. 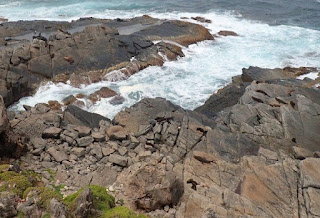 Initially, we saw rocks, then you might spot one or two of the lighter coloured seals, and once your eye got in, there seemed to be hundreds all over the rocks. Little brown blobs scattered in shadows, under overhangs, right on a flat rock that you'd just overlooked. It was funny to watch people come down and go, "oh a seal," and then a few minutes later, "They're everywhere."

We spent some time watching the seals surf onto the rock platform. A couple of them seemed to be just off the edge, playing in the waves, and then they'd take a few waves before they made it up onto the rocks and able to walk higher. I wish I knew if they were playing, or learning techniques. 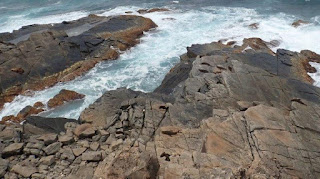 One seal we watched make his slow way down to a gutter. It took about 10 minutes, and it was like he wasn't sure he was going in (a bit like people at the beach when it's not a hot day). Then he eased his way into the water - no belly flop, but a gentle slide. Once in the water, he was playing - diving, rolling, sticking each flipper up, head up, tail up, rolling, swimming, chasing his tail. It was brilliant to watch and well worth us waiting so long!

I think you can see why 7 days wasn't enough time to see everything on KI!